The rise of the machines – drone safety and&nbspsecurity

The use of Drones has been growing steadily, from everyday tasks such as deliveries, to reconnaissance and film making, the ability of the technology to create a stable platform, which can fly anywhere, has developed rapidly. Traditionally remote-controlled items can be difficult to manoeuvre and require no little skill to fly, the technology drones’ employ has transformed this.

Alongside the many benefits we get by employing drone use, from safety and expense issues in access and maintenance, to enjoyment in the consumer market, they come with a whole host of security and privacy problems.

In this article we speak to Colin Bull, Principle Consultant Manufacturing and Product Development at SQS, about the challenges our transforming world poses. With over 30 years’ experience in vertical manufacturing, Colin has a wealth of experience in the sector as manufacturer and consultant, and holds a particular interest in aerospace, having worked for Rolls Royce designing jet engines in his early years.

Colin outlined his concerns about the lack of regulation in drone use, the impact on commercial airspace, and the security issues they pose.

“They are obviously very useful, for utilities companies they can inspect facilities and power lines that would be either dangerous and/or expensive for a human to go to. Whereas, a thermal imaging camera on a drone is relatively cheap and can be controlled safely. While in the film industry, large platform octocopters are very stable and can provide a different perspective on filming.”

He continued: “Drone use is coming to the fore from a consumer market perspective.

“I made comment on the AP80 that came into Heathrow last year, and made some predictions for the market, which raised a number of issues. With these large, stable, and easy-to-fly platforms, that have a relatively small outlay (£50 in some instances), it has become very easy to invade a space from the air. Whether that be someone’s privacy or something more nefarious.”

One of the major problems, Colin sees, is that the drones come under Civil Aviation Authority rules, which the general public are in general completely ignorant of.

“This could be easily solved by having the rules and regulations on the box.” He says. “But at the moment it is a relatively unregulated. There also needs to be a way of enforcing these rules around these devices – is it a law or a rule? And who will enforce it?”

“The industry is massively behind on tackling this. Particularly when you look at the capabilities available through 3-D printing. People could be designing relatively complex grabbing mechanisms, or printing out drones capable of holding a large payload. There is nothing to stop you creating an incendiary device and flying it anywhere.” 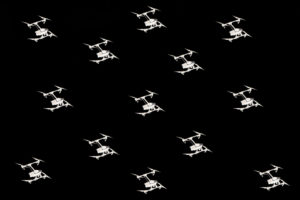 “So we have a situation where authorities are saying that drones can be a danger to aircraft, by being sucked into the jet engine etc, but actually it’s a much bigger problem, we could potentially be facing a squadron of drones entering Wembley on cup final day.”

This is obviously a very scary scenario, but the point Colin wants to make is that someone can gain the airspace advantage for very little outlay.

So, what is the answer?

“There needs to be a way of enforcing the regulations and it needs to be built in to the product design, for example to be line of sight only or limited payloads.

“We have all heard about the cyber security problems with Internet of Things devices; by using old technology, manufacturers are saving costs but are not future proofing the devices, making it easy for hackers to exploit the systems, so we need to beware of this.

“We also need to think about what will happen to the drone if it breaks it’s rule – we can’t have drones crashing out of the sky – will it return along its flight path via GPS or land safely?”

When you look at autonomous systems though, there are numerous inherent problems.

“Autonomous drones have their own problems, but I would suggest having to have published flight plans like any other flying utility. They could be registered and regulated, and then tracked by the security services and intercepted if need be. If we know the frequency ranges and algorithms of the devices, you could shield areas, for privacy or security, with radio jamming signals.”

How do we protect against a drone trying to invade our privacy or airspace then?

“You have three options to secure against drones: 1, A radio frequency jammer, so the product doesn’t know what to do and will land safely. 2, if it’s piloted through a smart phone then there is a connection which can be interrupted or taken over. Or 3, Kinetic destruction.”

Colin concludes: “The point is – whatever has to be done to control and regulate these devices, it has to be built in to the product design. These problems are the same across the world, anyone can gain the airspace advantage and the industry has been very naïve in tackling this.”

The post The rise of the machines – drone safety and security appeared first on Defence Online.