Successor: an enormous prospect for defence&nbspsuppliers

The Successor programme to provide a replacement for the submarines that carry the UK’s independent nuclear deterrent will provide huge procurement opportunities and a few challenges, as defence writer Mark Lane discovers talking to Paul Adams of supply chain consultancy Vendigital. 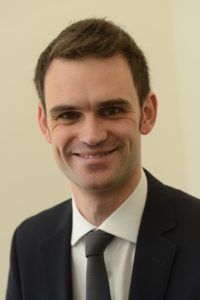 An independent seaborne nuclear deterrent is the keystone of Britain’s defence strategy, and has been since 1969.

Currently that deterrence is in the form of four Vanguard Class submarines which can carry up to 16 Trident II D5 ballistic missiles, each armed with up to eight nuclear warheads.

These submarines, which have been in service since 1992, will need to be taken out of service in the 2030s; and as it will take up to 17 years to build and design their replacements, work must start soon.

The four replacement submarines, known as the Successor programme, will be an enormous project, dwarfing anything else in the UK’s defence procurement. As the Successor submarines are intended to have a lifespan of at least 30 years and design of the new boats began in 2011, this will be a 50-year programme.

The latest estimate for the cost of the four boats is £31 billion, allowing for inflation, with a further £10 billion contingency. Design work already under way is costed at £3.9 billion and there will be additional costs for the through-life support phases, so that the total cost will be between £50 billion and £60 billion.

The early stages of the Successor programme have been given parliamentary approval but it remains politically charged.

Paul Adams is Head of Aerospace and Defence for Vendigital, a supply chain consultancy which does significant work in the defence sector.

He says: “The political nature of the programme does mean that whatever is political flavour of the month could impact it; and when you remember that from a manufacturing point of view it will be operating for the next 20 years and is to be maintained in service thereafter, it is very vulnerable to the whims of politicians.

“I think Trump will redefine how defence procurement in the US is challenged and how defence spending is scrutinised and that will inevitably have a knock-on effect in the UK and will impact the programme.’’

But, whatever the long-term uncertainties, it seems likely that Successor will clear any forthcoming parliamentary hurdles and this will mean enormous opportunities for suppliers and potential suppliers alike. It is estimated that the construction and through-life support of the Successor submarines will sustain more than 30,000 jobs in the UK.

The primes leading the programme are BAE Systems, Rolls-Royce and Babcock but it is hoped that there will be opportunities for many other companies, including SMEs. This accords with the MOD’s Defence Innovation Initiative, which itself came out of the 2015 Strategic Defence and Security Review (SDSR), which aims to bring new suppliers into the defence sector by harnessing the talents of academic and industry experts, especially in SMEs, to create innovation.

This, however, creates another challenge.

Adams explains: “The big primes are famously almost as institutionalised as the Ministry of Defence themselves so there’s a key question for MOD to answer, which is how they are going to drive innovation through those primes, which is absolutely at odds with what those primes are trying to do with some of their other markets such as aerospace where Rolls-Royce are trying to consolidate their supply chain into bigger, more stable suppliers and tier the smaller suppliers underneath. There’s going to be a kind of balancing act within those big organisations and a tension to resolve in the procurement process.’’

But still, it remains a huge programme and – directly or indirectly – it will throw up a huge number of supplier opportunities. The UK submarine supply chain currently involves up to 1000 companies throughout every region of the UK.

Clearly, the nature of these opportunities will change as the programme progresses and technology moves on.

“There’s a lot that won’t change,’’ says Adams. “Some of the fundamental nuclear technology in the vessel is unlikely to change a great deal. A lot of the technological advancements will be in a lot of the surrounding systems, particularly software and hardware, but also in terms of the life support systems and safety systems, which are the things which come later in the build. There’s lots of scope to build things in through the life.’’ 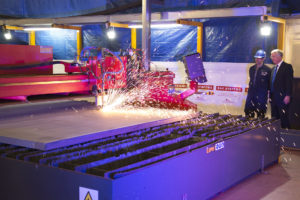 At a ceremonial event at the BAE Systems yard in Barrow the home of British submarine construction – Defence Secretary Michael Fallon began official manufacture work on the Successor programme.

As the programme stretches decades into the future, suppliers have to be prepared to play a long game. As Adams points out, some of these contracts will not be awarded for ten years or more; therefore, the challenge for some of the smaller suppliers will be around securing long-term relationships with the big primes or directly with the MOD. This will call for some long-term strategic thinking and planning on their part.

“Moreover, and this affects the primes as well, there is a challenge in obtaining and retaining the skills to do this work,’’ he says. “Because, you obviously don’t build nuclear subs very often. The people who designed and built the last ones may well be long retired by the time their skills are required again.

“So there’s a question for industry in terms of how do you support the programme from a human skill set point of view. That’s clearly much more challenging for the smaller organisations than it is for the likes of Rolls-Royce or BAE Systems.’’

However, while nuclear submarine designers and builders may be in short supply, there are other industries, businesses and disciplines which may not have been traditionally associated with defence work but which might be capable of forming an important part of the Successor supply chain.

In fact, as Adams points out, one of the most important areas of expertise that will be required is in the area of health and safety. The Kursk submarine disaster of 2000, when the Russian Navy lost a vessel and all 118 personnel on board in the Barents Sea, underlined the importance of this.

“If you put the nuclear warheads to one side, you’ve got up to 14 missiles full of rocket propellant on a submarine at any one time, operating underneath the water for very long periods. So any opportunities around securing the safety of the vessel is critical,’’ he says. “No government wants a submarine to get stranded and appear in the news headlines.’’

It could also be possible to apply technology which has been commonplace in other industries. Using modular build techniques, for example, would be attractive to the big primes and the MOD, allowing the easy replacement and upgrade of items.

“The time submarines spend at sea is being pushed and pushed and if, rather than carry extra engineers, a ship can carry a series of modules that can be plugged and played by the crew on board without having to have huge engineering skills, that’s a huge advantage,’’ notes Adams.

Procurement for Successor will cover everything from weapons and radar detection systems to catering and sanitary systems.

“Since the Vanguard Class submarines were built there have been huge leaps forward in things like sanitary technology and anything to do with maintaining a comfortable and happy existence for the crew,’’ says Adams. “That will be driven by sectors such as, for example, the cruise ship industry or the luxury yacht market.’’

But, not only will Successor benefit from the expertise and technologies of other industries, it is also hoped that there will be a feedback. The submarines will be state of the art and the work done on their development should make a major contribution in terms of technologies and techniques that can only strengthen UK industry.