Sven Hughes had his light-bulb moment when he was in a trench ‘in a hostile situation’ in Afghanistan. 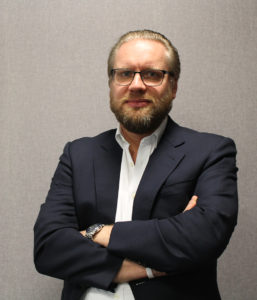 Lying on the ground next to another soldier, he noticed some triangular pieces of blue metal in the trench. The next day someone told him they were arrowheads from Alexander the Great’s time in the country 2300 years ago.

“It made me think about how this place had been in conflict for several thousand years,’’ says Hughes. “Perhaps there’s a better way.’’

In fact, the experience confirmed a feeling about PSY-OPS (psychological operations) that had been growing for some time.

Hughes was a reservist in Military Intelligence and had moved into what was 15 UK Psychological Operations Group (now part of 77 Brigade); it was with that unit that he was deployed to Afghanistan. He then worked in Special Forces support in the intelligence cell of 21 SAS doing PSY-OPS. After leaving the reserve he spent six months in Afghanistan as a civilian consultant to ISAF (International Security Assistance Force) working on PSY-OPS.

During all this time, he was also pursuing a career in marketing, where certain truths also dawned on him.

“What I was seeing in the marketing world was that language was treated very much as the Cinderella,’’ he says. “There was such a priority given to the visual that the marketing industry didn’t seem to be taking the opportunity to put more systems and processes behind the verbal; to fully understand a target audience psychologically so as to pattern-match the audience understanding with the right message at the right time to effect behaviour change.

“That was similar to what I was seeing in Afghanistan; that, for all the intent of ISAF, some of the times it could be argued it was falling down because the pattern-match wasn’t properly being achieved between audience insight and verbal engagement.’’

In Afghanistan, of course, the verbal engagement could not be via poster sights or TV, but had to be by word of mouth and rumour.

He recalls an operation in Afghanistan where the mission was to move some Taliban fighters from an embedded position.

“Up until that point the message had been the standard one of: ’We are coming and will begin bombing this area.’ That hadn’t effected the behaviour change of making those people put down their weapons and walk away from the battlefield.’’

However, by studying the target audience it was found that they were not afraid of death, but rather of capture.

“What we then tested was a different message, which was: ’We are coming to capture you, not to kill you.’ Suddenly they put down their weapons and left the battlefield. In that instance an awful lot of bloodshed was avoided by simply changing the messaging to better reflect the understood cognition of the target audience.’’

He adds: “By sitting down with the local population and talking with them about why they were tolerating the Taliban you could find real solutions. Doing it top-down and telling them the answers wasn’t as effective as talking with them; this gave you the necessary usable, tangible intelligence to have more compelling conversations to reduce the likelihood of division and increase the likelihood of moderated solutions.’’

Hughes has applied this to non-military areas through his London-based strategic communications company, Global Influence.

Is this a discovery in PSY-OPS or an old lesson relearned?

“I think it was an old lesson relearned,’’ he says. “If you look back to the Political Warfare Executive in the 1940s and the work of Sefton Delmer, the notion of PSY-OPS is the application of non-kinetic activity to effect behaviour change; it’s the mandate of PSY-OPS to do that, and what we’ve really done here at Global Influence over the last ten years of working on our IP is to find the most systematic way to achieve that quickly and effectively.’’

By applying the lessons and techniques of PSYOPS to marketing – and vice versa – Global Influence came up with a new model aimed at taking the best of both. The result was RAID: Rapid Audience Insight Diagnostic.

Hughes describes it as a ”24-hour model that can decode a target audience specifically for verbal interventions”.

RAID has been deployed in commercial marketing across 120 countries. In the world of media, for example, it was used recently to reposition The Times and The Sunday Times newspapers. It was also used for the Financial Times, which, according to Hughes, saw its largest increase in subscriptions in 125 years.

With the FT it was found that the single psychological principle that unified all the stakeholder groups and motivated them to buy the paper was the perceived advantage that the FT could bring the reader. Global Influence then built up the messaging from that behavioural insight.

“It was a way of getting the entire company and entire brand to speak with one voice,” explains Hughes. “What you had was a much more targeted and unified positioning that was pattern-matching the actual psychology of the various audience groups.”

The first step is to look at secondary research to build hypotheses which can be tested through techniques such as focus groups.

Plainly, however, the use of focus groups is hardly applicable to the likes of the Taliban. Hughes explains that this is why RAID was developed – so that it can take available open source material and not be dependent on having access to the target audience.

“As long as we are in a position to listen to them in some form, or look at their language use in some form, then even with the Taliban, that is the case,’’ he says.

Global Influence has used RAID in a global initiative with charities such as the Quilliam Foundation to help vulnerable families resist the calls of violence and terror and resist radicalisation.

The campaign, Families Against Terrorism and Extremism (FATE), aims to provide the charities with a voice that allows them to challenge extremist narratives.

“We were able to decode the audience in the ways in which Daesh was approaching them and attracting them and then encode the charity messaging to counteract that and provide a counter-narrative that isn’t just perceptual but is behavioural, to stop them responding to this messaging,’’ says Hughes.

The FATE messages are tailored for different psychological profiles of vulnerable groups of people – for example, those isolated within their communities. The campaign has been rolled out to four countries and has been a great success – not only as measured by reach, with 1.8 billion people having been exposed to it, but also as measured by personal testimony.

“We are getting emails from people saying: ‘I have not pursued a journey towards extremism as a consequence of coming into contact with this messaging’,’’ says Hughes. “Also, by social listening you can monitor the conversations that are happening between Daesh and susceptible youths and watch the interventions having an effect – which is to reduce the likelihood of Daesh getting its verbal hooks into these people.’’

Lessons learned in the FATE campaign can be fed back into defence and Global Influence is promoting that. It is training for EWCE (Empowering Women Countering Extremism) in Beirut and has taught at Shrivenham Defence Academy.

Hughes says: “We are taking our responsibilities seriously in terms of cross-pollinating back what we have found.’’

With heightened awareness of cyber threats, charges of Russian interference in the US Presidential election and concerns over so-called ‘fake news’, PSY-OPS has taken on a new importance. Global Influence sees a role for itself as an expert in the techniques used by our enemies and in enabling our side to encode its messages more effectively.

“Because essentially this is a war of words,’’ says Hughes. “And it has such tactical and strategic importance.’’

However, he emphasises that the whole point of PSY-OPS is to get people to act differently.

“Perception change is all very well and good, but it must be effect-based and not perception-based.’’

Image from the Families Against Terrorism and Extremism (FATE) campaign

The post Winning war with words: a new perspective on communication appeared first on Defence Online.