Weighing in at an approximate 39,000 tonnes, the tanker – which has capacity for up to 19,000cu m of fuel and 1,300cu m of fresh water – will join the Royal Fleet Auxiliary; a civilian-manned flotilla established to support warships and aid the Royal Navy in its operations across the globe.

Before this transition can take place however, RFA Tidespring must first undergo customisation in Falmouth. A comprehensive programme of works is planned at the A&P Shipyard, after which the tanker will take to the seas in time for the New Year.

In this, the ‘Year of the Navy’, RFA Tidespring marks yet another major milestone. 2017 will see the inauguration in Portsmouth of the first Queen Elizabeth Class aircraft carrier, initial construction of the Type 26 Frigate, and the official unveiling of a permanent Royal Navy base east of Suez – the first of its kind in over 50 years.

Minister for Defence Procurement Harriett Baldwin had this to say: “RFA Tidespring’s UK arrival is a key milestone in 2017, the Year of the Royal Navy, which will also see the MOD develop world-class ships and submarines in support of Britain’s role as a leading naval power.

“Backed by a rising Defence budget, the delivery of the Tide Class tankers is a crucial element of the Government’s £178Bn plan to ensure our armed forces have the equipment they need.” 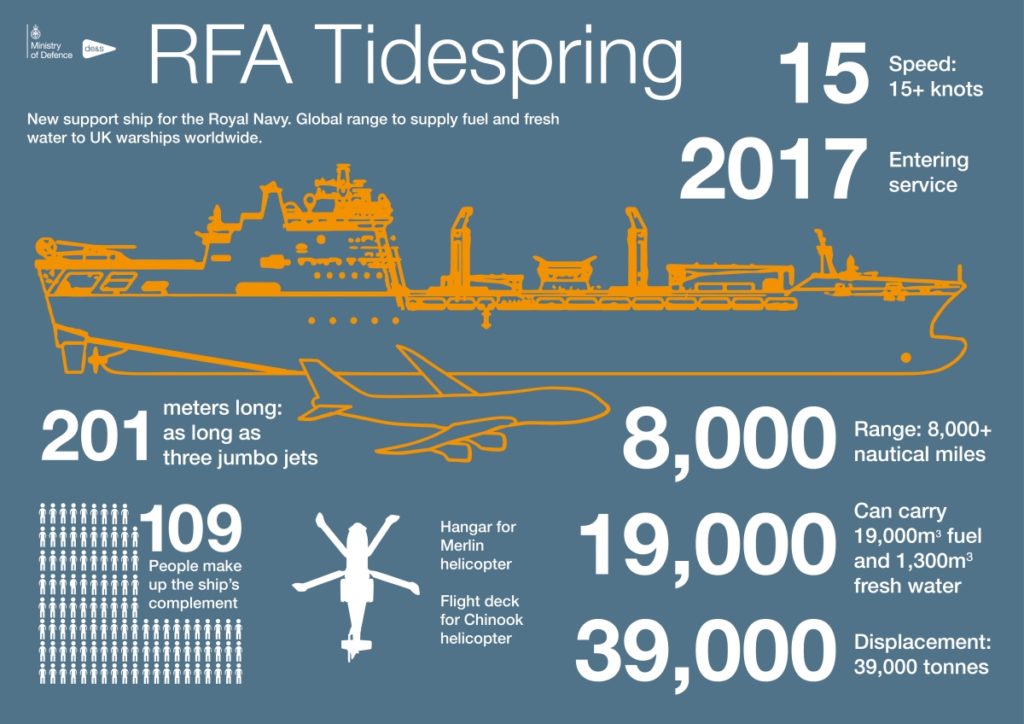 Crucially, the wider Tide Class programme is worth around £150M to the nation’s economy, and will help sustain highly skilled jobs across 27 separate UK-based companies. As part of the customisation, state-of-the-art communications equipment will be installed alongside self-defence weaponry and armour; all of which will enable RFA Tidespring to operate in the most challenging of environments.

Vice Admiral Simon Lister, who led procurement of the Tide Class at Defence Equipment and Support, commented: “RFA Tidespring will be a familiar and reassuring presence for Royal Navy ships as they undertake missions in defence of the UK’s interest.

“The continued successful delivery of the Tide Class programme, meeting all requirements and under budget stands as a testament to the excellent working relationships which DE&S has built with suppliers in the UK and around the world.”

According to the Ministry of Defence, the Tide Class has a flight deck large enough to accommodate a Chinook helicopter and offers significant improvements over previous RFA tankers such as double hulls and greater environmental protection measures.