Crowded public spaces can be vulnerable to terrorist attack but there is technology which aids protection without creating disruption, as Mark Lane discovers talking to Marie Clutterbuck, Marketing Director at Digital Barriers.

Fatal terror attacks soared by 650 per cent between 2015 and 2016, according to the Global Terrorism Index.

The majority of terror-related fatalities happened in Africa and the Middle East, yet recent events in Paris, Berlin and Quebec demonstrate the increasing threat to domestic security that the West faces from ‘lone-wolf terrorism’.

These attacks are particularly dangerous because of the security challenges associated with picking out a sole malicious individual from a large crowd of people. It takes just one individual with the right access to cause catastrophic harm and perpetrators tend to target public spaces – such as transport terminals and event venues – where it is difficult to lock down access.

According to Marie Clutterbuck, Marketing Director at Digital Barriers, this new threat demands a new approach and the adoption of new technology.

She says: “Used in conjunction with intelligence, people screening and facial recognition can act as another layer of defence to protect the public. These solutions work partially by providing a deterrent and ultimately by stopping attacks before they are carried out.’’

There are, however, a number of key considerations when protecting crowded spaces through screening. 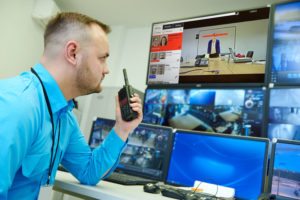 In mass transit areas such as airports and train stations, where there are especially large numbers of people, there are practical and cultural considerations to be factored in when screening people for concealed weapons.

“A balance must be struck between increasing security accordingly, but also making it possible for people and staff to go about their business as normal,’’ explains Clutterbuck. “Simply increasing traditional methods of security screening, or moving them into public space entry points, for example, will only push the problem somewhere else, or cause more delays to take place in what is already a complex and time-consuming process.

“In regard to traditional security technology it’s important to note that people do not want to be ‘X-rayed’ continually due to health concerns, or face what can be seen as serious invasions of privacy just to get on a train or visit a stadium.’’

The dilemma for transport authorities and public venues is the need to avoid hindering internal staff from doing their jobs and preventing adding to already long queues; while, at the same time, ensuring the safety and security of all people within and around crowded spaces.

Digital Barriers has adopted a technology known as the terahertz (THz) frequency range to use in the passive security screening of people. Following several years of technological development, terahertz has been developed as a frequency for detecting concealed objects including firearms, IEDs (improvised explosive devices), illegal powders and liquids in public spaces.

The person-borne concealed threat is a potent weapon in the terrorist armoury, as a person carrying a concealed threat can modify their actions to suit local circumstances and move to busy crowded areas for maximum impact, or even to areas of perceived lower surveillance.

In addition, the nature of the threat from concealed person-borne explosives and weapons is evolving and unpredictable. There is a rapidly growing requirement to screen people over a much broader range of locations and security scenarios, and to screen individuals covertly and at the earliest opportunity at the perimeter entry points of the locations in question. This must be achieved without slowing the flow rates of people or introducing what are known as security screening ‘bottlenecks’.

Clutterbuck says: “A ThruVis camera can detect weapons, suicide vests and other concealed items at a distance of ten metres when hidden under clothing. It can detect plastics, liquids, metal objects or indeed any item concealed on a person. The camera can be used in mobile deployments, covertly if required, and moved around public spaces such as in arrival / departure halls, ticketing gates, stadium entrances and so on.’’

She argues that using this kind of technology also addresses health and privacy concerns as it is not an active solution and does not direct radiation to the person it is scanning, as is the case with traditional scanners.

She adds: “The technology instead looks at individuals just as a normal video camera would. In addition, no anatomical details are revealed as the person being screened shows up on the display as a white shape, with anything concealed showing up in black, so it addresses both cultural and privacy issues at the same time.’’

A further advantage of this type of screening is that it doesn’t require people to be stopped for a screening procedure, which means that, in contrast to traditional gate scanners, it avoids creating traffic bottlenecks.

It is possible for individuals to pass the camera and be screened without their knowledge. The only requirement is that the particular person being screened at any time is visible to the camera, which cannot see through other people. This means it is best located at ‘pinch points’ such as single-file entranceways or escalators where security teams can be sure that the camera has a good view of any individuals that require screening.

“ThruVis uses real-time screening, a bit like watching a video feed, with the display showing the white outline of a person with anything they are carrying showing up as black,’’ says Clutterbuck. “Someone with a suicide vest is obvious to spot, and likewise the shape of a weapon is easy to see when using the technology, so it requires very little training for operatives to use. The output can also be streamed in real time to control rooms or even to mobile devices.’’

“It doesn’t have to be one hundred per cent accurate to be of benefit, just hundreds of times better than the human brain,’’ notes Clutterbuck. “Humans are instinctively good at spotting people they know, even from a small glimpse; however, we are less successful when attempting to recognise those unfamiliar to us. Blanketing a large rail station or concert venue with teams looking for a suspect often therefore proves a fruitless and unaffordable exercise.’’

Facial recognition offers a means of improving the odds when it comes to comparing individuals against a known watch-list. The role of humans then becomes one of controlling the setting of the threshold for alerts – and therefore the number of expected false positives – appropriate to the situation and target being monitored for. For example, when seeking out a white collar criminal the threshold can be set high to avoid wasting police crime. However, in a case where strong intelligence suggests a suspect may have travelled to a major city with a bomb, all sightings that are reasonably close to that person’s likeness can be flagged for consideration.

“Greater intelligence, combined with greater situational awareness of live events using technologies such as passive screening and facial recognition technology, mean that today public spaces and mass transit can be secured without much impact on people’s daily lives,’’ says Clutterbuck.

“It is the only viable way forward and provides early warning of threats, a deterrent to malicious parties, and an additional layer of security, all while still allowing freedom of movement and very limited levels of disruption to people’s daily lives.’’