The Ministry of Defence has negotiated a brand new £1.4Bn contract for HMS Agamemnon – a state-of-the-art Royal Navy attack submarine intended to safeguard a new compliment of UK aircraft carriers.

As part of the ‘Astute Class’, HMS Agamemnon is one of the largest and most advanced attack submarines to enter service in Royal Navy history. It is the sixth of a fleet seven strong, each of which is being built by BAE Systems at its Barrow-in-Furness base. In total, some 8,000 employees are actively engaged in BAE’s submarine business, with thousands more working as part of the wider supply chain.

Crucially, the new agreement guarantees a fairer deal for the Armed Forces and taxpayer both, with an incentivised contract arrangement ensuring cost efficiency and the best work output possible.

Defence Secretary Sir Michael Fallon had this to say: “This latest investment means we are well on our way to completing our fleet of Astute submarines. These are the most advanced submarines ever operated by the Royal Navy and are already providing unprecedented levels of stealth and attack capability across the world.

“Backed by a rising defence budget and a £178Bn equipment plan, Barrow will remain the hub of our submarine build programmes providing high skilled jobs for years to come.” 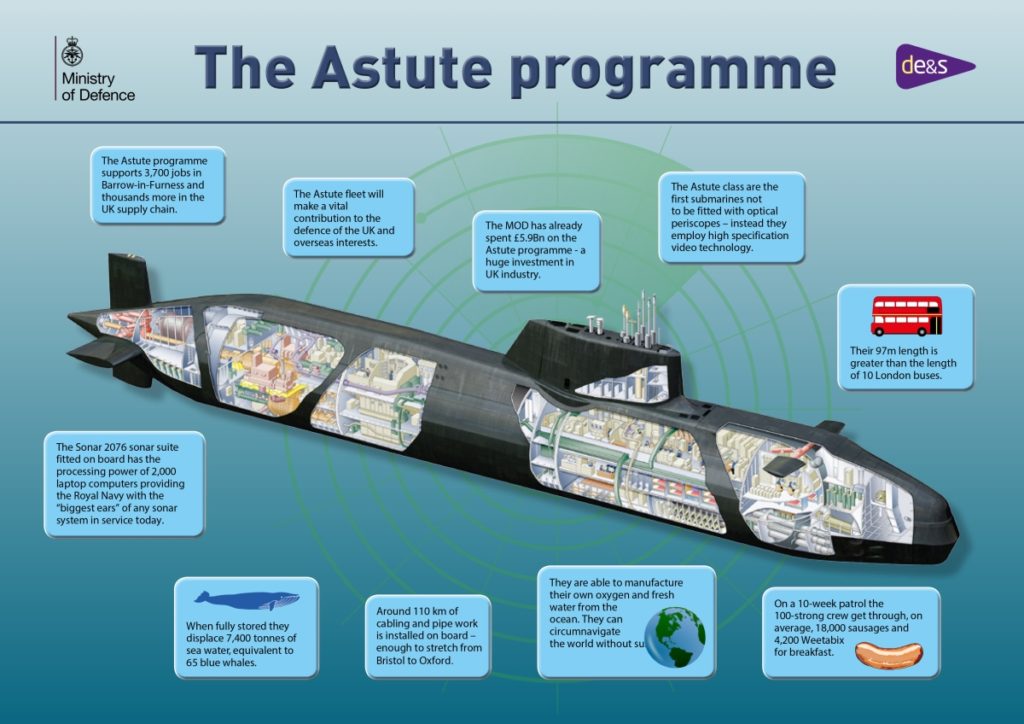 This is no small feat however. Construction of the 7,400 tonne, 97 metre long submarine is ongoing at Devonshire Dock Hall in Barrow, with Boat 5 – dubbed HMS Anson – and the as yet unnamed Boat 7 alongside. Their sister submarines – HMS Astute, Ambush and Artful – are already in service with the Royal Navy and taking part in operations globally.

Rear Admiral Paul Methven, Director Submarines Acquisition for the Submarine Delivery Agency, commented: “The signature of this contract secures another world-class nuclear submarine for the Royal Navy. These are the most technologically advanced submarines we have ever operated, offering much greater firepower, better communications and more advanced stealth technology than their predecessors.

“Today marks another significant milestone for the Astute programme, that demonstrates the UK’s ability to deliver complex engineering projects, providing a fleet of submarines which will protect the UK’s interests around the globe.”

Nuclear powered, the aptly named Astute Class can circumnavigate the world submerged, all the while generating oxygen from raw seawater. Each submarine can operate covertly and remain undetected despite being 50% larger than the Royal Navy’s current ‘Trafalgar Class’, which the Astute Class is set to replace.

Will Blamey, Managing Director of BAE Systems Submarines, concluded: “Securing the contract for the sixth Astute Class submarine is a significant milestone for BAE Systems and the result of many years of hard work by our highly skilled workforce. The Astute Class submarines are amongst the most highly capable and technologically advanced in the world and we’re immensely proud to build them for the Royal Navy.”