Through a period of intense political uncertainty, the UK has kept its maritime intentions clear. Earlier this year, the Ministry of Defence boldly stated that 2017 was the year of the Navy, with numerous new ships set to join the fleet, and the jewel in the crown – HMS Queen Elizabeth – setting sail for sea trials on schedule.

We spoke to Guy Platten at the UK Chamber of Shipping about the priorities for the maritime industry and what effect Brexit could have. He stated that triggering Article 50 has pushed three main priorities to the fore for the industry.

“The first of these is securing the unimpeded movement of goods,” he said, “because if goods are stopped etc, it will be chaotic and it will slow trade. We aren’t interested in the custom duty to be applied, which is for someone else to decide, but the main practicality of it is that goods need to keep moving. What we don’t need is loads of people in high-vis jackets stopping trucks and asking to see paperwork. It would be a permanent operation stack, which nobody needs. If each lorry was topped outside Dover –bearing in mind they get 16,000 through there each day – it would be an absolute nightmare.

“So we need a seamless transition and we are lobbying government heavily about this.”

He continued on to state that the government does fully understand this position,

“It is the last thing [the government] would want. You can imagine the press aerial shots of thousands of lorries waiting at the ports around the UK, it wouldn’t look good politically and it is a major concern of the ferry companies and short-sea sector.”

Skilled labour, and access to that pool, is another major concern for the maritime industry. Guy spoke about the current process and the hope that whatever system is put in place is not overly bureaucratic and allows companies to carry on doing the most important thing, business.

“Shipping thrives on talent and we need to be sure we can get the right talent. In our sector there are typically Brits abroad and foreign nationals here – that is the nature of the shipping sector, it is a global business, people move about and we need to be able to ensure this.”

Part of the legislative mountain that leaving the EU brings, will be to decide what EU regulations will be kept or dropped. Could dropping overly bureaucratic regulations assist the industry?

“Our priorities will most likely shift and change as negotiations develop,” says Guy, “I was just talking to one of our members in the cruise sector who was concerned about what will happen to access to ports for UK passengers? Will it be expensive to disembark them? This will all need to be hammered out, and we are hoping things will become clear quickly.”

So the industry is looking ahead to what can be done now, to improve the situation, and help UK businesses compete globally.

Part of this is pushing the skills agenda. Like in many industries skilled labour is an issue, maritime needs to see more officers into training and is wants government support in this.

Guy explained: “To lift the UK back to its pinnacle of naval power and maritime industry, we need to transform the UK ship register. We are looking at getting more ships registered under the UK flag, this is also an important from a security point of view. Having a strong defence industry and strong navy helps with the security.” 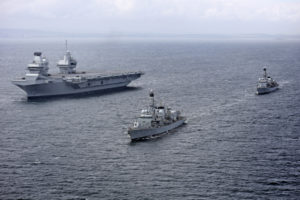 An important part of this is ensuring that there is a level playing field for the British supply chain when awarding government contracts.

Guy says: “In particular we would like to think the fleet and support ships will be built in the UK. The whole shipbuilding agenda is an important part of enterprise, as is the offshore sector with wind farms etc, that we ensure the UK marine content is there – if there is government money invested in all of these things then we would like to make sure that the UK maritime industry is represented, if not given priority.”

Another factor to growing the industry is on the fiscal side. Guy looks at the tonnage tax and wonders if a more beneficial regime would encourage more owners to base there ships in the UK.

With the new HMS Queen Elizabeth setting sail for sea trials in June, the British maritime industry has come under sharp focus, demonstrating that the UK is still very much a maritime nation and showing off our skills to the world. Guy expounded on the achievement of this feat: “I was privileged to be there when the Queen Elizabeth was named and it is an unbelievable piece of engineering. HMS Illustrious was berthed next to it and it looks like a dinky toy. I am proud of what we have achieved with this and I think it’s a fabulous advertisement for UK maritime sector.”

With Sir John Parker’s shipbuilding report due this year, we asked Guy what he is expecting to see and what he hopes to come form it.

“The hope for the ship building strategy is that it is ambitious in its intent. That would certainly be good to see. Sir John Parker had some really good points in his report, so hopefully it will take these points and focus on procurement and value for money. I think the constant changing of ships then selling them on or renewing them, is a great idea, and I really hope the government take the report seriously and use it as an opportunity and implement many of his recommendations.

“Ensuring a ship building capability in the UK is brilliant. Five years ago we had no commercial ship building going on in this country, and now we two dual fuel N&G ferries being built on the Clyde, Boaty McBoatface The Sir David Attenborough at Cammel Lairds, and commercial catamarans being built for Thames clipper on the Isle of Wight. The feeling is if we get this right there could be benefits all round from defence to commercial shipbuilding.”

The aerospace industry is booming again in the UK, with 2016 a record year for manufacturing and the latest statistics revealing 2017 is due to continue this. We asked Guy if this success can be reflected in the UK maritime sector.

“Well, we used to be one of the world centres for shipbuilding, that all went and we are staring small again. We won’t be able to compete for the massive VLCC, but these specialist ships and autonomous vessels, I really feel there could be a renaissance in shipbuilding. I think defence could be a key enabler of that, as it will give companies the confidence to invest. If they have these long-term mod contracts they can invest into getting commercial contracts and the whole thing is a virtuous circle.”

He concludes: “We are an island nation, we have history of being a strong maritime: pre EU, within the EU and now outside of the EU, the sea surrounds us and it is part of everything we do.”