It’s a truism that military personnel are subject to work-related health problems, but what is less appreciated is that one of the most prevalent injuries is to hearing. Defence features writer Mark Lane speaks to one supplier which believes it has a solution to the problem.

Hearing problems – or at least an increased awareness of them – are causing growing concern in military circles.

Research in the US has found that much of the noise experienced by military personnel exceeds that of the maximum protection achievable with double hearing protection. Little surprise, then, that in the US induced hearing loss and tinnitus remain the second most prevalent Service-connected disabilities.

This is also a problem on this side of the Atlantic. In 2014 more than 4000 UK military personnel were registered as suffering from either poor or impaired hearing.

“We put a lot of people into very loud, noisy situations with lots of impulsive noise or continuous low level noise, whether that’s from helicopters or in engine rooms or in rapid gunfire training.

“We are looking for innovative solutions to monitor and diagnose people in a quicker manner, above and beyond the gold standards of routine audiology testing.’’

One of the businesses endeavouring to develop such a solution is Plextek, an engineering and design consultancy of about 85 people, based near Cambridge.

Founded in 1989, initially as a communications and RF consultancy specialising in the development of defence technologies, Plextek is now a full product and innovation consultancy helping companies from Technology Readiness Level 1 to TRL 9 in defence, security, medical and wireless communications. 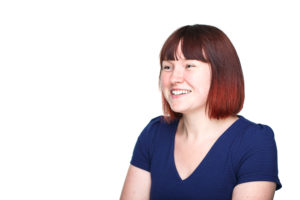 “The core of our work is electronics but we span all the way from industrial design to helping organisations with manufacturing,’’ says Collette Johnson, Head of Medical at Plextek. “We tend to work for university start-ups all the way up to big global players.’’

Now the company has developed a prototype device which can detect early symptoms and warning signs of tinnitus, which often does not become apparent to the sufferer until it is too late and the underlying condition cannot be treated.

If it is caused by exposure to loud noises prompting a temporary tinnitus, relief can be gained by removing the source of the noise, but chronic tinnitus results from constant exposure to damaging noise. In a military context, with its unique demands, guarding against the dangers of hearing damage can present a particular challenge.

“It’s constant exposure to those things that is a problem.’’ explains Johnson. “It’s also stuff that’s out of your control. If you’re on an operation noise may be a secondary consideration. When you’re operational, even though you’re wearing hearing protection, when somebody is talking to you, you might take that protection off so you can hear what’s going on. Because we don’t fully understand the behaviour, we have to mitigate against what people are potentially doing.

“It’s becoming more of a problem, because in the defence space it’s not just what you are using, it is also a question of lifestyle.’’

Tinnitus is becoming a growing problem in society generally with an increasing prevalence among adolescents, perhaps through increased exposure to loud music.

“Modern-day life means we are exposed to a lot of loud noise and in the adolescent population it’s a growing problem,’’ says Johnson. “Tinnitus is a very poorly understood issue and there are lots of environmental factors at play. But the military are seeing it as a problem and learning lessons from the US.’’ 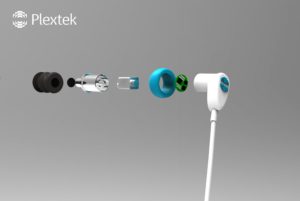 Currently the technologies and techniques used to detect tinnitus are limited to intermittent health checks, or treatment only comes when personnel are already experiencing advanced symptoms. Plextek’s prototype device aims to tackle this problem with technology that can be integrated easily into military headsets and which can reliably detect the early signs of tinnitus.

“We thought about whether there was something we could produce that could help deal with tinnitus,’’ says Johnson.

Johnson explains: “We thought it would be interesting if we could look at the brain’s responsivity to see if there’s a downage in the communication and if we’re getting damage in the ear.’’

A gold-plated earbud in a headphone emits thousands of clicks a second; then, using software, an electrode monitors and measures when the brain responds to the sound.

“You can use that every day in normal headphones and see if you can start to notice changes – if you can then we pick up very early response changes, even before the damage is done, and we can start looking at hearing protection,’’ says Johnson.

“We looked at whether we could produce something that was very cheap and easy to use so it could be installed in the majority of headphones, whether that’s consumer or military, and be able to test people on a day-to-day basis.’’ 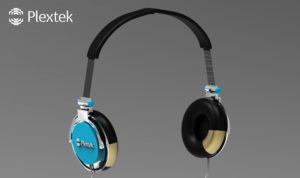 Plextek’s aim is to work with headset providers to develop a total hearing protection system.

“We are going to have conversations with those people to look at how we can implement into their system,’’ says Johnson. “We are also talking to the end users in the Ministry of Defence and the people who are going to use that technology to make sure we know it’s fit for purpose and that the system fits their needs, so when it goes into headsets it’s not something that disconnects them from their hearing protection but is something they can see has got real benefit.

“It shouldn’t interfere with their day-to-day lives, it shouldn’t feel cumbersome. They want it to work in the background while they are doing their normal job.’’

Plextek expects to see the device in a headset going to market in about 12 months.