With 2016 seeing the release of the next generation in AR/VR headsets, promising a more immersive experience than could be had previously, 2017 is set to be the year Augmented and Virtual reality breaks the mould particularly in the training sector.

Augmented and Virtual reality have been used in training solutions for a number of years, but have never really taken off due to the perceived ‘clunkiness’ of the experience. However, as the technology is reinvented and improved, the capability is massively enhanced and training solutions acknowledge the importance of this technology.

We spoke with Tom Symonds of Immerse Learning about the developments in the sector and how envisages AR/VR training solutions in the future.

Immerse Learning are leaders in simulating and gamifying the physical world – transforming the way you learn and communicate through live 3D and VR learning experiences- having developed the only live learning VR ready platform in the world.

Winners of the gold award at the Learning Awards for Learning Technology of the year, Immerse is at the forefront of the online learning space. At the core of Immerse is a ground-breaking learning platform that combines highly authentic 3D simulation with a live voice capability, allowing training to be delivered from around the world in real time.

There have been reports recently about the millions invested in the AR/VR training market in 2016, can you tell me what is driving new interest in the sector? 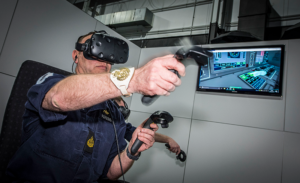 VR as a concept has been around for 30 years. It was heavily used by the US military many years ago and has been continued to be used in the defence sector and latterly in the healthcare sector as a training solution, but typically it is a very high end expensive solution. Most people would also accept that the hardware has never delivered a perfect experience, with issues around motion sickness etc. These previous, underwhelming experiences have slowed down the adoption of the technology. So the really exciting thing about VR in the military this year is the new generation of headsets, particularly in our opinion the HTC Vive headset.

When you combine the latest hardware headsets with the next generation of haptic technology (for example a pair of haptic gloves allows you to convey heat/pressure etc.) the possibilities are amazing. Training experiences become even more realistic. So if you’re training on a piece of artillery, certain components of that will be extremely hot in reality, what VR and haptic technology can do is generate that same feeling.

In VR it’s all about training your muscle memory, because you have been interacting in an extremely hands on way in VR training, your ability to react in the correct way when confronted by a scenario or piece of equipment in real life is enhanced significantly when compared with watching a video in a classroom for example.

It’s all about ‘learning by doing’ in those situations and retention of the training goes up significantly.

What sort of applications do you imagine VR to be used in defence: ie equipment training or situational training?

There are a number of potential applications – we have been working in collaboration with QinetiQ on their investment project to create an open source, maritime team training environment. We have created a virtual role-playing environment where four roles are involved, so you could have four people in four different locations wearing VR headsets, coming together to train in this virtual environment, interacting with each other in real time, but also reacting to data that is being displayed on a machine in front of them, and they can interact with switches levers etc.

The idea is that the trainer is not in the same location as the trainee. There are significant cost and productivity savings and once you have built the virtual asset – it is built forever more, so it’s not like a simulator which is a physical asset and if you want to be trained in it you have to go to the simulator and there is only likely to be one of them. For example, there is one training simulator for a specific jet-type for the airforce and if you have to do a certain number of hours in it to train, you have to book time and go to its location. 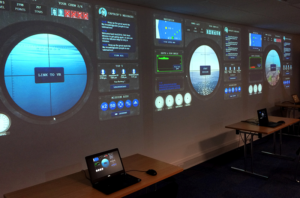 One of the advantages of our solution is that, in theory, you could be in there 24/7 and if you wanted to have ten versions of that asset – it costs the same.

So in our view we see this as a very powerful way in improving the skills, performance, speed to competency of key staff because you can be training on a much more regular basis.

Would it be used for just troops, or for doctors/medics/rescue scenarios?

Our experience with other sectors (pharmaceutical, healthcare etc.) shows that the technology can be used in a variety of scenarios. We have a programme with Glaxo Smith Kline where we created a virtual training object of a specific piece of equipment that is found in their manufacturing plants across the world. They can now deliver a hands-on training experience, with the training team located centrally while training goes out to the different centres on around the globe.

The same would apply to a new military asset or weapons system. You would initially familiarise yourself with the asset and then have on-going training and on-going assessment. Once you’ve been in the field you can give feedback, using that asset as a communication device as well as a training device.

Certainly if you look at some of the work done at Birmingham University in the medical space sector and the training procedures, it’s clear that wherever there is a need to familiarise a person with a specific environment, a specific scenario, specific piece of equipment then VR really starts to come into its own.

What is your experience of working in the defence sector?

We see defence as a key sector for the business going forward.

As a company that hasn’t been in the defence sector for 30 years or so, moving in for the first time has been quite daunting, mainly because the processes involved in becoming a supplier: getting security clearance, RSPs etc. – those kind of processes are not set up to favour the smaller company.

And so I don’t think its easy, but that is one of the reasons why we are so excited about working with QinetiQ. They are a Prime and we see potential for a very exciting relationship, where we are bringing a specific set of capabilities to the table. What we are aiming for is to win business in partnership with Primes like QinetiQ rather than trying to win it on our own.

I have spoken with Primes that agree, saying it is very useful to work with small businesses as you have the leeway to be more innovative, where as the Prime is more risk and results based.

Part of what makes you survive as an early stage technology company is being innovative, be ingenious, being able to listen to the market, being able to move quickly.

And it’s one of the reasons primes like working with SMEs; it gives them the edge to win more business.

VR is really going to break through this year. The development of the amazing hardware will really launch towards its potential. The new generation AR & VR will make an impact across the board – especially as it is starting to be deployed in the field and you will get the first real data in terms of driving learning outcomes and accelerated learning outcomes from that.”