This incorporates the Curtiss-Wright ASIST (Aircraft Ship Integrated Secure and Traverse) system – which helps helicopter pilots to land on a ship’s flight deck during a quiescent period in the ship’s motion – into SEA’s own simulator, DECKsim.

About 30 ASIST systems are currently installed or on order for five navies on seven ship types, operating with five different helicopters worldwide. 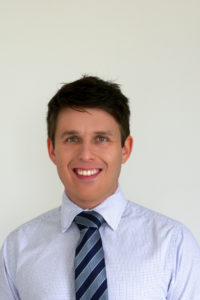 SEA Training Systems Project Manager Ben Webb says: “For navies employing ASIST, familiarity with the system’s procedures is essential for flight deck officers and other crew members operating in the aircraft environment. It will also add capability to our simulator, enhancing the depth of training that SEA can offer.”

SEA, known as Systems Engineering & Assessment, is based near Frome in Somerset, with satellite offices in Bristol, Aberdeen and Barnstaple. Formed in 1988 and now part of the Cohort plc group of independent technology companies, it has about 300 employees and provides engineering and software design to government agencies, industrial prime contractors and academia. Its main areas of business are electronic systems for maritime, transport, oil and gas, naval combat systems, dismounted soldier operations, traffic enforcement and subsea engineering.

In its training and simulation for maritime, one of the business’s main areas of focus is DECKsim, a high fidelity synthetic environment developed in-house by SEA using its proprietary immersive procedure training infrastructure that allows the training of flight deck officers.

“It’s about learning all about the ins and outs of becoming a flight deck officer and also practising without live aircraft,” explains Webb.

“It covers everything from basic training serials, from launch and recovery all the way through to the more complicated training such as underslung loads, fires, emergency training, on and off lashings, winching – anything that a flight deck officer might need to know and understand to become a flight deck officer.”

In a fixed installation the student stands in front of a six-metre-wide screen with the instructor sitting behind them running the simulation. The student directs the on-screen helicopter using the appropriate gestures, to which the helicopter responds.

The system’s gesture recognition library currently contains more than 60 gestures and that grows as new ones are introduced.

Each training serial has a start point and an end point, but this is flexible.

Webb says: “A launch serial would be that the helicopter is on the deck and the ending condition is that it’s in the air. We can then write another serial block, for example lashings off – which will also have a start point of lashings being on and end of lashings not being on. If you bolt those two together, you have a training scenario of lashings off and then a launch. You don’t have to stop the simulation for that.”

The system’s development has borrowed heavily from computer gaming technology.

“Obviously the integration with gesture recognition was a big enhancement and the use of graphics cards and their power means that we can be at the cutting edge of the latest graphics on the screen,” says Webb.

“There’s nothing bespoke, it’s all COTs [commercial off the shelf] gaming components, hardware you can buy from a local PC store – it’s just high-powered gaming hardware.”

He adds: “We use a gaming engine called OGRE3D and we then customise this for the customer, adding an extra level of realism for the student.”

Physically based rendering – the automatic process of generating a photorealistic or non-photorealistic image from a 2D or 3D model – has added a level of realism for the students that they have come to expect from playing video games.

Webb explains that, apart from ASIST, extra functionality is always being added to DECKsim.

“It has a ship’s helicopter operating limit simulator within it so those operating limits can be emulated as a training aid for the student. It can emulate the ship’s equipment on a touch screen so the student can walk up to it and press the button and it’s hooked up to the visualisation – the likes of deck lighting and deck nets – so they flick a switch on the touch screen and on the visualisation they will see their resulting action.”

DECKsim can be delivered as a fixed system, as delivered to the Royal Navy and the Royal Norwegian Navy, or in a portable version which goes in a flight-ready suitcase with two gaming laptops and a virtual reality headset.

“It has a vast library of 3D models contained within it now – helicopters, fixed wing, across the range, Merlin, Wildcat, Lynx, Chinook, Apache, commercial helicopters, F35s and many more. We have a vast range of training serials.

“It also has an after action record suite so when the student is playing out their training it’s being recorded.”

Webb continues: “It has fully integrated audio communications, including environment sound and surround sound as well as student and instructor communications on push-to-talk switches. There are pressure mat floor switches that allow the students to change their viewpoint if they move to one side. It’s also got a tactical scene editor so you can build your training scenario.” 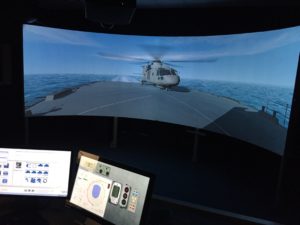 The original system was delivered to RNAS Culdrose in 2007, with an update being added in October 2015 and further enhancements in April 2016. SEA has also delivered the system to the Royal Norwegian Navy and there is a version in Australasia for ground marshalling. The company also supplied the portable system to Airbus in 2011, which can be used on oil platforms or vessels with training delivered using a virtual reality headset so students and instructors are not tied to a classroom.

An advantage of the system is that it allows training in simulated extreme scenarios.

“The system is set up to repeat the same exercise again and again until the students understand it. You might want to set fire to your helicopter eight times, but you’re not going to do that in real life,” says Webb.

“It has a full range of weather conditions we can implement, from low-visibility training right through to thunderstorms and full time of day simulation so you can do night-time training.”

SEA is working on further developments for the engine, including the latest advances in augmented reality.

Webb explains: “Then you can train potentially using real assets. So you could be on the back of a frigate using one of these devices with simulated content; if you didn’t have a rainy day and you wanted it to be a rainy day, the augmented reality could provide that for you. Likewise, if you have a real helicopter but you don’t want to set it on fire, augmented reality can provide that for you.

“We are looking into the minimisation of the footprint needed for the portable variant. There are lots of small form factor projectors, and with the advancements in graphics card technology we can minimise the hardware that’s required in order to have this in a much smaller case for much quicker deployment, thus reducing cost.”

He adds: “There are always ongoing graphics improvements. The main ones we are focusing on are global illumination and volumetric lighting, with enhancements to the reflection capabilities of the engine coming soon.”

The Royal Navy is now allowing DECKsim to be used for the requalification of flight deck officer trainers.

According to Webb, the Navy estimates that the system saves as much as 50% of live flying hours for a student to reach full flight deck officer competency.

Webb concludes: “Running a helicopter is not cheap, but it’s not just a cost implication, it’s also a strain on the resources – having the availability to train the students in the first place.”