Communication on the battlefield is an important priority, but has also been problematic. In this article we speak with Timothy Coley, a specialist in communications at Thales UK, about the problems and solutions being developed for dismounted soldiers.

Two fire teams approach a battlefield objective. Navigating rolling terrain in arrowhead formation, the group then come under enemy fire and move into dead ground in order to conceal themselves from the enemy firing position. While the pressure of survival mounts high, the terrain obscures line-of-site contact between the two teams. In such dynamic and tense encounters, soldiers become heavily reliant on each other. The ability to communicate and work as a team becomes paramount to success and even survival. Working as a team they need to discuss and evaluate dangerous, complex and changing situations, make decisions, plan and co-ordinate action.

It is only within the past few decades that dismounted soldiers have been issued an individual radio for communications within a squad, or section. However, how adequate are these traditional soldier radios at facilitating this teamwork to outmanoeuvre and defeat the enemy?

The limitations of traditional communications technologies 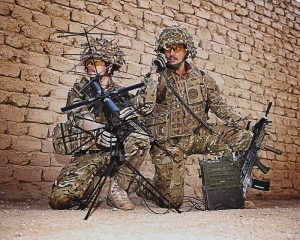 In the past decade, traditional soldier radios have provided point-to-point communications over a limited range – perhaps up to 800m in open terrain. While a squad would reasonably be expected to operate within these confines, the operating environment can have a significant impact on the useful range of a soldier radio, reducing it considerably from the notional 800m figure.

Legacy short range soldier radios were easily screened by natural or artificial features, reducing the effective range of the radio. This reduction in range can mean that soldiers are not able to communicate directly with each other. As a result, messages may need to be relayed manually, introducing delay, potentially leading to distortion of commands and even certain members of the unit not receiving orders.

Recognising that the environment in which soldiers operate is not likely change, one needs to examine how the right balance of physics and technology can provide better soldier communications. Various solutions have been proposed in order to improve range and alleviate the limitations of point-to-point radios. Range can be improved in a number of ways, including: operating the soldier radio at a higher output power; networking; operating at a lower frequency; and using a narrower band waveform. All these approaches have advantages and disadvantages, but in the context of the communications services required by a dismounted soldier, who is manoeuvring in and out of cover and has a limited capacity for carriage, some of these approaches are less optimal.

Increasing range by increasing power is inefficient as it is not a linear relationship. The rule of thumb is that doubling the range requires a ten-fold increase in output power. This output power increase requires more input power, which manifests itself on the soldier as a larger burden of batteries to carry. In addition, more restrictions exist when operating higher output power radios as they are more likely to interfere with other systems on the man, in a vehicle or around the area of operation. 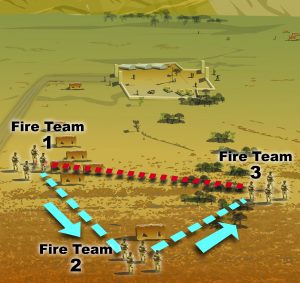 Narrowband waveforms have a higher power density as the radio output power is distributed over a narrower bandwidth. However narrowband communications provide a limited data capability. The key question here is: how much data does the soldier need? Typically data requirements for the dismounted soldier are limited to blue force tracking (BFT), enemy positions and orders – all of which can be accommodated on narrowband waveforms. In addition modern waveforms enable data and voice serves to run concurrently without any collisions so the data throughput is much more predictable.

Consideration of different networking solutions for the dismounted soldier

Some soldier radios provide an automatic rebroadcast function, enabling one radio to re-transmit a transmission it receives from another radio. More complex devices provide mobile ad hoc network (MANET) functionality, in which each radio acts as a node and is aware of the relative locations and potential paths to other radios in order to ensure that a message is transmitted to all users on the network.

While MANET solutions provide a more intelligent approach than a simple rebroadcast, it imposes a significant burden on the network as each radio must issue and receive handshakes from neighbouring radios in order to determine the path that messages should take. Increasing the number of users on a network increases this network management and if each radio is moving then the network management task becomes even greater.  As a result MANET networks are usually limited to no more than 30 users as beyond this the burden of managing a dynamic network leaves little useable capacity.

MANET radios can be spectrum and power hungry. Traditional networking waveforms tend to be wideband as they need multiple channels to facilitate the relaying. Power density is lower with wideband waveforms as the radio output power is distributed across the wider bandwidth and hence point-to point range is reduced. Broadly speaking, doubling the bandwidth reduces the power density by half, and this can have a significant impact on the effectiveness of the radio system. In addition, MANET networking radios are expensive – something that may deter even developed nations from equipping each and every soldier with this level of capability.

Recognising the limitations of MANET radio and their unsuitability for a large number of dismounted and manoeuvring soldiers, some manufactures have been developing a middle way between rebroadcast and true MANET solutions.

Barrage relay is a form of MANET where the burden of network routing is removed and every radio is programmed to automatically resend any transmission it receives regardless of proximity of peers in the network. This approach means that everyone in the net will transmit every time a message is sent, so the network is busier and battery life is reduced. As more users are added to the network utilisation increases, hence increasing the number of relays. If multiple voice channels are incorporated into a barrage relay mechanism then the retransmissions increase further, as any transmissions on any net will result in all radios having to transmit – to the point where every radio is almost permanently in transmit.  This has a significant impact on battery life, requiring the carriage of multiple or larger batteries and the associated logistic support to charge these.

Intelligent networking waveforms maintain a frequently updated picture of who is where in the network. Like MANET, the best route for re-transmission is always known and communication can be maintained as team members move in and out of any shielding that prevents direct communication between them. Combining this approach with a limited number of re-transmissions, or hops, reduces broadcast traffic and the network management overhead. Limiting the networking relay hops can still provide the benefits of MANET in most environments, but without the traditional MANET drawbacks. Limiting the network in this way also enables the capability to be delivered in a narrowband waveform so range and battery life are improved.

For the kind of short-range communications needed within a dismounted infantry squad, simulation and real trials have shown that three hops is the optimal networking complexity needed to ensure coverage between soldiers within the usual confines of a squad-level operation,  even in the most demanding environments. 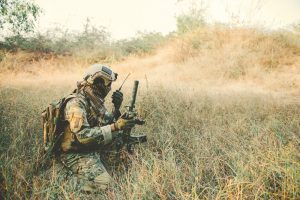 Networking benefits for the dismounted soldier

A squad of twelve soldiers splits into three fire teams, each occupying dead ground and therefore unable to maintain line of sight with each other due to obstruction by urban buildings and trees. With a point-to-point radio, given the undulating terrain and distances involved, the first team would have to ask for transmissions to the third team to be rebroadcasted manually by the second team. However, in this instance, a networking radio would extend the effective range of communication of the first team and enable all soldiers to remain in contact.

In an urban operation, while the range involved may be shorter, housing density can reduce the signal and impair point-to-point communications. The use of a networking waveform enables the message to hop between different points, maintaining communications between buildings and obstacles.

Networking can extend the notional operational range of the radio by enabling communications to be re-transmitted by multiple point-to-point links. When used by manoeuvring soldiers, rather than at fixed-sites, the network may become fractured as radios that are being relied on to bridge communications go in and out of coverage. This can be partially mitigated by using multiple network paths such as barrage, but, as discussed above, this has other drawbacks. Fundamentally, the most reliable solution is to have sufficient point to point range in these open environments to reduce/remove the reliance on networking. This is best achieved for the dismounted soldier through frequency selection and/or the use of narrowband waveforms.

Furthermore, networking provides advantages in environments where the radio signal is attenuated by buildings, trees and the suchlike. This is where networking really comes into its own, as other methods to extend coverage in these difficult environments (power increase, frequency etc.) can be much less effective. As discussed there are a number of flavours of networking waveform with different benefits and drawbacks. For the dismounted soldier where Size, Weight and Power (SWaP) are limited, some networking waveforms are less appropriate. Moreover, where large numbers of soldiers are operating together on the same network then other networking approaches are less suitable.

The benefits of soldier radios have been well-proven since their introduction. That dismounted soldiers can communicate between one another has enlarged the scope for infantry to co-ordinate operations in a way that was not previously possible

This capability can be radically improved by providing soldiers with networking radios that extend range and provide more resilience to their communications. While a MANET or barrage relay solution provides this networking capability, it comes at a cost that is probably disproportionate compared to the relative benefit to dismounted infantry.

Networking waveforms with a limited number of hops are therefore a more appropriate – and affordable – solution for dismounted soldier communications.

Timothy Coley is the SquadNet Product Manager in the Land Communications and Protection division at Thales UK. Timothy read War Studies and French at King’s College London, graduating in 2010 and joining Thales in 2011. After undertaking several placements on Thales’s Business Management Graduate programme, Timothy has focused on radio communications, first as a Market Research Analyst and, from 2015, as SquadNet Product Manager.