Pitching for and then fulfilling defence contracts might seem intimidating to the uninitiated, but the experience of one firm shows that it can be relatively plain sailing, as defence features writer Mark Lane reports.

And it was one that had to be met at MOD Caledonia in Rosyth to support the fitting-out of HMS Queen Elizabeth, the first of two new aircraft carriers being built for the Royal Navy.

MOD Caledonia – formerly HMS Caledonia – is a tri-Service Ministry of Defence site. Its role is to provide professional support services to the Royal Navy, and more generally the MOD, on the East Coast of Scotland, with particular emphasis on the requirements of the Queen Elizabeth Class build project, operational and non-operational lodger units and their personnel.

In 2014 Caledonia already had 422 bed spaces available but an assessment by the Defence Infrastructure Organisation (DIO) indicated that a total of 704 were needed, leaving a shortfall of 302.

It was decided that self-contained portable cabins would provide the best solution as being quicker and lower cost than building units from scratch and avoiding the need to rent private accommodation, which would have cost more and seen crew members widely dispersed.

That decision having been made, DIO awarded a contract to undertake the necessary infrastructure works – including the construction of a drainage and sewage system to connect into local services together with the installation of an additional transformer to meet the extra power requirements – to Imtech, and began the search for a supplier of cabins.

One firm which tendered was an Oldham-based company called Bunkabin, which had previously supplied the MOD at RAF Brize Norton.

The family-run business was set up in 1979, originally manufacturing portable offices for the construction industry; but in 1994, with the construction of the Channel Tunnel, the business saw a market for good-quality sleeping accommodation.

“We started making them and people wanted them straightaway, and before we knew it we had orders for them before we had even built them,” says Business Development Manager Ben Rothwell. “Before our competition had got wind of it, we had made a considerable number; our reputation preceded us and now we are the biggest in the country.” 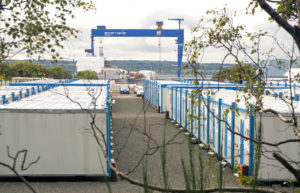 The cabins, which conform to building regulations, include beds, mattresses, thermostatic controlled heating, en suite bathrooms and storage space and sleep one, two or three people. They come in three ranges: junior, deluxe and bespoke, which comes with LED lighting, a fridge and a microwave.

In December 2014 Bunkabin was approached by the MOD and asked to quote for some units in Edinburgh.

“We put some prices in and we didn’t know anything more than that,” recalls Rothwell. “Just after Christmas we were contacted again and asked to requote, with more meat on the bones now, asking for a specific number and asking whether we could cope.”

Bunkabin was subsequently invited – along with a couple of national-name competitors – to take some units up to MOD Caledonia.

“We turned up there on a freezing day to meet people from the DIO, Royal Navy and main contractor CarillionAmey,” says Rothwell. “We went into a competitive dialogue session where we sat in front of all these people and were asked lots of questions; we told them who we were and what we were about.

“We were extremely proud of our product. We knew it could deliver everything that they wanted, and even though we haven’t got an expensive sales team we stood in front of them saying, yes we could do that and we’ll be the people delivering it on the day. We weren’t saying anything just to win the contract and then on the day have totally different people turn up.’’

They were then asked to submit detailed plans and maps and a proposal for one year’s supply of units. Three months later Bunkabin received a phone call advising that their bid had been successful and the company was the preferred supplier.

“We had impressed people with our pride in our product and our ability to offer confidence that we could be trusted,” says Rothwell.

Bunkabin was contracted to supply 302 Bespoke Sleeper and 13 Welfare Units to house laundry and communal spaces.

However, the MOD’s choice to go for the Bespoke Sleepers caused a slight problem for Bunkabin.

Rothwell explains: “We hoped they would pick the Junior Sleeper because we had 1200 of them available but they said no, they wanted the bigger one. We said well, we have a problem because we only have 360 of them and we already have customers hiring some of them, so we haven’t got 302 lying around.’’

Bunkabin is the manufacturer, so the company explained to the MOD that it could provide the required cabins but that it would need six weeks’ notice. In the event they had about three months until phase one so they won the order and fulfilled the contract.

Now the cabins are in place and the original contract has been extended to three years.

Bunkabin also provides maintenance support and it works with CarillionAmey to keep the cabins up to standard, maintaining stores on-site supplied so that any repairs can be done quickly. 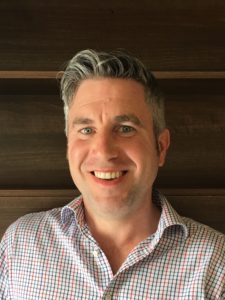 Once the aircraft carriers are fitted out and moved to their new home in Portsmouth, the cabins will be decommissioned and returned to Oldham for use elsewhere.

It seems the cabins have been a success.

Captain Simon Petitt, Senior Naval Officer on HMS Queen Elizabeth, said: “The accommodation is both modern and practical, and more importantly offers a real sense of home comforts for our sailors who are looking forward to moving in and being in one location so that we are all of one company.”

The MOD also reports that during a visit to MOD Caledonia the Navy’s then First Sea Lord, Admiral Sir George Zambellas stayed in one of the cabins and was ‘very complimentary’ about his experience.

This is a matter of understandable satisfaction for Bunkabin.

Rothwell, who himself served eight and a half years in the Royal Navy, says: “We are proud to have done it. We get lots of good feedback and that’s quite flattering.’’