Brexit: what does it really mean for the UK defence&nbspindustry?

Brexit and its implications continue to be widely discussed. Here, defence writer Mark Lane takes a look at a recent report on what leaving the EU might mean for UK defence and for defence procurement.

Negotiations over the UK’s departure from the EU are barely under way and it will be some time before details are revealed.

However, it is possible to look at some of the defence issues likely to arise, and in this context three experts have produced a timely report.

Stuart Young, Peter D Antill and Richard Fisher of the Centre for Defence Acquisition, Cranfield University, Defence Academy of the UK have jointly produced SDSR 2015, Brexit and Future UK Defence Acquisition – Issues and Challenges and its salient points repay examination by anyone involved in the sector.

The authors point out that the British electorate’s decision on 23 June last year to leave the European Union sent shockwaves not only through the British political establishment but across both Europe and the wider world.

They write: “As far as UK defence acquisition was concerned, a strategic environment that was already in a state of dynamic flux due to the publication of a new National Security Strategy (NSS) and Strategic Defence and Security Review (SDSR) in late 2015, was made even more complex by the referendum result and what that could mean for the UK’s international relations.” 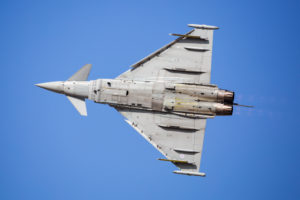 NATO has been the bedrock of the UK’s broader defence relationship with Europe, and in most cases joint defence acquisition has taken place on an ad hoc basis, through either bilateral (such as with France on the Sepecat Jaguar) or multilateral (such as the Panavia Tornado and the Eurofighter Typhoon) arrangements, separate from organisations such as the European Defence Agency (EDA) or OCCAR.

Exceptions to this have been the A400M transport aircraft and Principal Anti-Air Missile System (PAAMS), as well as, potentially, Boxer.

The report’s authors add: “Although there have been opportunities for the UK to increase its participation and even assume more of a leadership role with the resultant increase in opportunities for UK industry, the UK has seen these organisations as having a greater benefit to smaller countries and something of a bureaucratic roadblock as far as acquisition cycle times are concerned.

“For example, in October 2012, the UK Government announced it was reviewing its membership of the EDA, which didn’t rule out the UK’s complete withdrawal. Other issues, such as the creation of an EU ‘army’ have been strongly opposed by the UK, as having the potential to undermine NATO and a duplication of effort with the potential to push the USA away from Europe. Hence, in defence policy terms at least, the UK has not been in favour of greater European integration.”

One result of the Brexit vote has been the fall in the value of sterling against foreign currencies and the report argues that this instability is likely to continue.

This is important because, according to US State Department figures (for the years 2002 to 2012), the UK has an established demand for importing defence equipment from the US, including significant equipment purchases (such as C-17 aircraft and Predator Unmanned Aerial Vehicles, or UAVs) as well as spares related to US equipment operated by the UK Armed Forces. 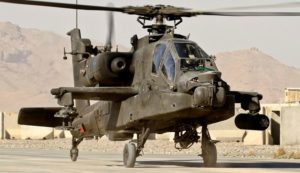 Not only that, but the UK plans to buy a number of ‘off-the-shelf’ products from the US, including additional Apache helicopters, nine P-8 Orion Maritime Patrol Aircraft (MPA), 138 F-35B aircraft and 20 next-generation Protector UAVs, all of which will add to the yearly demand for defence imports from the US in terms of spares.

“Given the deterioration in the value of the pound against the US dollar, this must represent a major financial challenge for the MOD. It is a situation not helped by the weakening of the pound against the euro; for example, the British Army plans to acquire 589 Ajax vehicles for £3.56 billion, the majority of the costs of which are in euros,” the report notes.

It adds, however, that if the contract was signed in sterling, this will be a problem for General Dynamics, rather than the UK Government.

Even if the companies involved had bought extra spares and components in the lead-up to the referendum, and the UK Government had bought dollars in advance, these programmes will run over decades, and it would be optimistic for the MOD to set up contracts on the assumption that the pound will recover to its pre-referendum level.

In his Autumn Statement, the Chancellor said that the Office for Budget Responsibility (OBR) expected the UK economy to grow by 1.4% in 2017 (down from 2.2%) and 1.7% in 2018 (down from 2.1%). Therefore, a defence budget based on 2% of GDP would not grow significantly for at least the next couple of years.

However, if the fall in the value of sterling is sustained, the cost of the UK’s defence exports will rise by at least £700 million a year, representing a 2% cut in the purchasing power of Britain’s defence budget.

On the other hand, UK industry could gain certain advantages. EU rules have laid down that the acquisition of defence equipment above a certain threshold has to be open to competition across the entire EU.

The report says: “The UK defence industry (and the Ministry of Defence) sees this directive as at best, a delay in the procurement process, and at worst, a barrier to UK industry winning defence work. It could also be seen as a constraint on the UK’s ‘freedom of action’ as a sovereign state.”

Similarly, post-Brexit, the UK Government could adjust other EU rules, for example in the environment and safety sectors, to the benefit of UK industry. 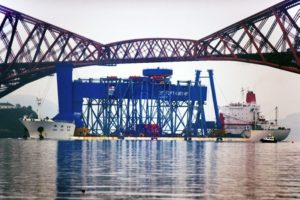 © Crown Copyright The UK’s largest crane passed under the iconic Forth Rail Bridge this morning (Thursday, March 3) on its way to Babcock’s Rosyth Dockyard in Fife.

Brexit also reopens the question of Scottish independence, and that in turn could have implications for the Type 26 frigate construction programme and the future of the Faslane submarine base.

The report’s authors believe Brexit is unlikely to affect the Franco-British relationship, cemented by the Lancaster House treaties in 2010, which included a nuclear cooperation agreement; both countries are also committed to a number of defence projects, such as light anti-ship missiles and FCAS (Future Combat Air System).

The report judges that the UK’s exit from the EU will certainly limit its access to EU research funding. There is a case to made, however, that the size and strength of the UK economy, coupled with its research base and defence industry, make it an attractive partner for other European states in terms of defence acquisition.

The authors argue that it will be important how the UK uses Brexit to recast its role in the world and redefine its identity in a global context, forging new relationships with other countries. The prime areas for these new partnerships will be in Africa and Asia, the Commonwealth and the Overseas Territories.

The report concludes: “Such an adjustment will also require the UK to decide just what sort of foreign, defence and security policies it wants and what sort of capabilities it requires to fulfil such a role.

“The curse ’may you live in interesting times’ seems to be especially active at the moment, with the UK electorate voting to leave the EU, and the election of Donald Trump to the US Presidency. For UK defence acquisition, this means there is a great deal of uncertainty in the short-to-medium term, with a whole range of issues and challenges needed to be taken account of. These have the potential to have an impact on how the MOD operates and how it generates UK military capability.

“Only time will tell as to the true impact and consequences of Brexit.”

The post Brexit: what does it really mean for the UK defence industry? appeared first on Defence Online.