Logistics. Let’s face it, moving materiel from A to B has never really captured the public imagination in the way that infantry assaults, tank battles, aerial dog fights and naval heroics have. Few schoolchildren dream of becoming a military logistician. After all, logistics are something people only really notice by its absence. We ignore it at our peril.

Throughout history, battles, campaigns, and even wars have been won or lost because of logistics. Alexander the Great’s mastery of logistics allowed him to conduct the longest military campaign in history, yet Napoleon’s long retreat from Moscow has gone down as one of the greatest logistical disasters of all time.

The story continues today as we work to equip our troops at home and abroad, supplying them with everything they need to do their jobs. From aspirins to aspirators, batteries to boots, logistics in today’s volatile world are more important than ever, and it is our job to get the right kit to the right place at the right time. And, of course, at the right price. In a world of rising costs and tightening budgets, it is imperative that defence cuts out the wastage and squeezes the most value out of every pound we spend.

Once described as a ‘logistical leviathan’, the new Defence Fulfilment Centre (DFC) is a fully modern and up-to-date £83 million MOD logistics centre based at Donnington in Shropshire. Delivered on time and on budget, the facility marks a step change in the way the MOD will deliver logistics support to the UK Armed Forces.  It will act as the central hub for the storage and distribution of Defence Inventory and will support our Armed Forces globally. It really is huge; the warehouse space alone covers an area the size of ten football pitches! 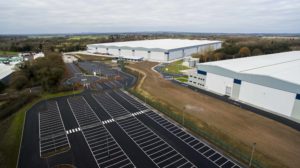 The hub is at the heart of the current drive to modernise a huge part of the MOD’s supply chain. It was officially opened in April 2017 by Harriet Baldwin MP, then Minister for Defence Procurement, but will not be fully operational until March 2019. When it does ‘go live’, the DFC will use tried and tested systems and processes to store, source, organise and transport materiel, quickly and seamlessly. Every single item that passes through the facility will be scanned upon picking and packing, giving greater control and visibility over the items we store, and where we store them. A major target for the modernisation of the UK’s logistics delivery programme is that whoever needs access to inventory information will receive the most accurate picture of what is available and where it is, in near-real time. Greater visibility will help to build confidence and drive efficiencies as the users of the defence supply chain can trust the information being provided.  This will, in turn, help reduce the effect of the long standing ‘just in case’ stockpiling culture and replace it (at least in part) with best practice of holding what is needed, and in optimum locations.

Of course, all these strategic improvements are backed up by a major step forward in technology. The DFC has automated picking with a ‘MiniLoad’ to handle stock-picking for the most frequently needed items from 300,000 locations. This means warehouse staff will no longer have to retrieve the majority of picks manually from shelves and bins, which will result in fewer errors, and will save considerable time. With the MiniLoad able to complete a colossal 1000 picks an hour, and with almost 68% of all demands from the DFC coming from this automated system, it will certainly be critical to the DFC’s success.

An industry-leading Warehouse Management System will also be in place in the DFC, bringing greatly improved processes and systems that will drive efficiency. Due to this, the facility’s put-away times will reduce in some cases from 33 to just 5 days! Not only does this mean that things move more quickly, but it also means that significantly less floor space will be required to deal with incoming items such as unit returns. 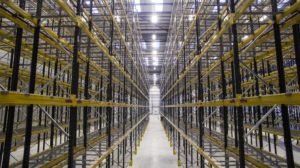 Roger West, Director, Logistics Delivery, MOD, said: “The new Defence Fulfilment Centre will enhance UK defence by using technology that delivers a service to the front line commands in line with the best that industry can provide. The DFC provides tangible evidence of our commitment to deliver what our Armed Services need, whenever and wherever they need it.”

When the DFC is fully operational in March next year, the Armed Forces will truly have an exceptional supply network at their fingertips. Users will know that their demands are being fulfilled and the end goal is for users to be able to track the delivery of items until receipt. Something akin to the ‘Amazon experience’, but in the military arena. Of course, behind the scenes, the military version is actually far more impressive as retail warehouses have to do little or no work on the stock in their processes, whereas the DFC will have to manage and maintain the materiel and equipment stored!

By providing a technologically advanced support network, which is able to meet any foreseeable surges in operational requirement, the UK Armed Forces will continue to be amongst the most agile in the world. The MOD is busy delivering 21st century logistics fit for our 21st century Armed Forces.