In this article defence features writer Robert Atherton speaks exclusively to Saab about the evolution of radar, the company’s 21st century sensor tech and the critical importance of the UK marketplace.

All too often the name of the long-established Swedish defence and security company, Saab, is associated foremost with its former automotive spin-off, and not without reason – the car business is still looked back on as one of the world’s most recognisable brands. But if you’re at all familiar with the defence and security sector you will know that the company’s enduring presence is as a long-standing pillar of the defence industry, having pioneered state-of-the-art sensor technology over the past 60 years.

Saab first took shape in 1937, and has served the defence and security sector ever since – initially as a manufacturer of military aircraft for the Swedish Air Force. Today, that remit has broadened significantly, with a full spectrum offer and a 16,000-strong workforce. Saab now operates across the globe, boasting an annual turnover of around SEK 31 billion, of which around 23% is reinvested into various R&D initiatives each year. Crucially, this pattern of continued reinvestment has enabled Saab to make major surveillance inroads, specifically around state-of-the-art sensor technology. 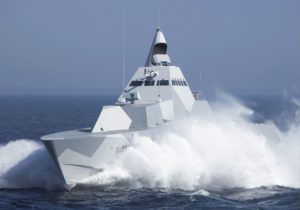 Sea Giraffe on a Visby Corvette

It’s here that the company has established itself as a world leader, with diverse sensor capabilities that span the land, sea and air domains. What’s interesting, however, is that this expertise has been shaped by the complexities of the Swedish coastline and the Baltic littorals that historically made navigation an uneasy prospect. It’s an ingenuity born of actual need, and it has driven Saab to carve out an innovative range of sensor-related technology.

Undoubtedly, innovation is essential in the sensor space. If commanders are to react and respond to threats in real time, sensor technology must keep pace with the cutting edge. And so, through new approaches, Saab hopes to hand back the reins to the commanders themselves, affording them greater latitude when time and space are in short supply. Here, adaptability is key; with recent innovations enhancing the range, accuracy and mobility of land sensors in response to a noticeable rise in manoeuvre warfare.

“At Saab we exploit our technology across multiple domains which allows us to transfer lessons learned from any one product or environment into all our products very quickly,” said Andy Thomson, Saab’s UK Director of Land Surveillance Marketing and Sales.

But what should commanders expect from a 21st century radar system? Chiefly, that it’s multifunctional. It is no longer enough to have siloed land, sea and air surveillance. Cutting-edge technology allows all three to be integrated, and today’s commanders expect nothing less. Here, Saab’s use of innovative AESA (Active Electronically Scanned Array) technology has allowed the business to boost the flexibility of its sensor tech and integrate key software upgrades to enable clients to take the initiative when new threats emerge.

“We’re very familiar with open architectures and interoperability,” continued Thomson. “We have consistently demonstrated our ability to integrate our sensors into other people’s systems, and from a UK perspective we have an established track record integrating our sensors into existing and future UK-based weapon and C2 systems.” 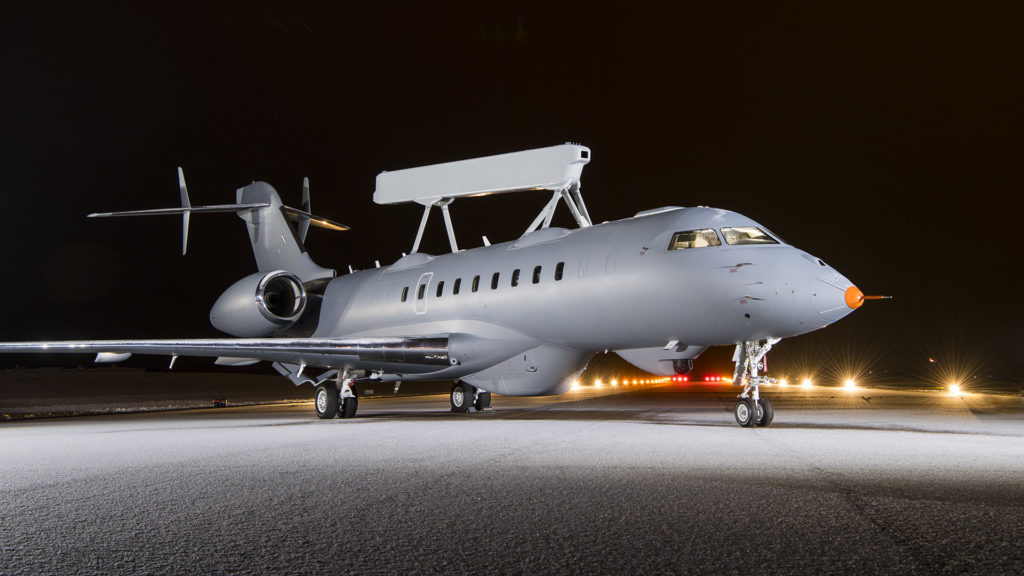 Chief among Saab’s surveillance offering is GlobalEye, an iteration of the Erieye radar system, which has found widespread success in the Airborne Early Warning and Control (AEW&C) marketplace. GlobalEye is something of a two-hander. It pairs the powerful Erieye extended range radar with the modified ultra-long range Global 6000 jet aircraft from Bombardier, delivering a single centralised solution for air, maritime and ground surveillance in the process.

According to Matthew Smith, UK Director Airborne Surveillance Marketing and Sales at Saab: “With Erieye ER (extended range), the goal is to detect everything from very slow, even stationary targets such as hovering helicopters, right the way through to extremely high-speed hypersonic, dynamic targets – both close-up and a long way away. It really is a quite demanding set of requirements.”

But for Erieye ER to fully meet the needs, both present and future, of the defence community, a comprehensive programme of research and development would first be required: “We arrived at Erieye ER following a ten-year R&D initiative,” added Smith, “to ensure we understood how the threat was evolving, where the market was going, and the kinds of capabilities our customers would require in the future.”

Thus, Erieye ER is a true multi-role system – one able to occupy either dedicated or combined roles, with the ability to instantly switch between them should the need arise. GlobalEye is flying today, with the latest Erieye ER radar and associated mission equipment; this brings the number of aircraft types equipped with Erieye sensors to five, and the number of nations to eight – further proof of the system’s interoperability. 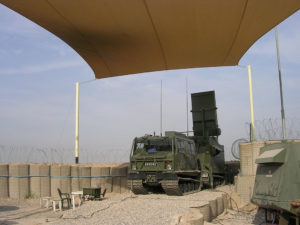 Known as MAMBA in the UK, Saab’s weapon locating system ‘Arthur’ is another innovation in the sensor space. It is able to detect ballistic trajectories such as rockets, artillery and mortars, and calculate the firing site and point of impact – enabling effective counter-fire within seconds. In addition to the UK, Arthur has found widespread use across 12 separate militaries – among them Norway, Sweden, the Czech Republic, South Korea, Spain, Italy and Greece.

Meanwhile, the Giraffe Agile Multi Beam (AMB) 3D surveillance radar has proven a hugely popular land-based air defence solution. Generating a real-time, 360-degree panorama of the surrounding airspace, Giraffe AMB is able to track incoming aircraft, missiles, rockets and drones on a highly mobile platform. Its lofty mast, which rises higher than any other radar of similar class, allows the system to survey distances of up to 120 kilometres. Crucially, this technology has helped save countless lives, providing early warning against incoming threats during international operations.

Clearly, the Ministry of Defence has taken notice. Having recently acquired its tenth Giraffe AMB from Saab, the UK has become the single biggest operator of land-based Giraffe AMB radars in the world today. In fact, the Giraffe AMB surveillance radar system is poised to play a pivotal role in the UK’s new ground-based air defence (GBAD) Sky Sabre system, while also providing air target tracking to the Land Ceptor air defence platform – as demonstrated at a recent weapons test in the north of Sweden. And to illustrate the cross-domain nature of the Saab range, over 65 systems from the maritime version (the Sea Giraffe AMB) are in use with 11 different navies including the US, Australia, Canada and Singapore.

According to an MOD spokesperson: “The Giraffe radar system provides our military with unmatched surveillance capabilities, keeping the UK safe and protecting our troops on operations. Giraffe provides our cutting-edge Sky Sabre air defence system with crucial battlefield intelligence, so it is brilliant to see our defensive strength bolstered by the arrival of the tenth radar system.”

For Saab, Giraffe AMB sits at the centre of a wider family of surface radars which collectively offer a multitude of land and sea solutions for ground-based air defence and surveillance. 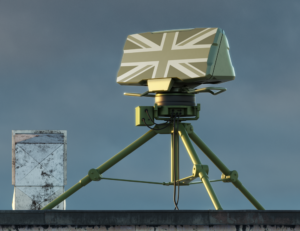 Weighing less than 150 kilograms, the lightweight Giraffe 1X is the company’s newest member of the Giraffe family. Named ‘X’ to denote its X-band radar characteristics and designed with mobility in mind, the G1X can be integrated onto any platform, irrespective of size. Furthermore, its compactness means that it can easily be relocated by means of manpower alone – from a vehicle to the rooftop of a building, for example – making it ideally suited to the rapidly changing pace of mobile forces.

Similarly, the Giraffe 4A is a fully multifunctional radar which blends capabilities of the Arthur and Giraffe AMB with an all-new AESA-inspired radar sensor. Crucially, this new radar offers unparalleled range, performance and operational flexibility in a single solution. And in the maritime domain, the Sea Giraffe AMB applies that same methodology to open water in an effort to safeguard ships and secure superiority at sea; indeed, the solution can now be found across five classes of US Navy ships.

In many cases, the UK seems to be an early adopter of Saab technology. And given that 23% of the Giraffe AMB’s content comes from the UK, Saab has a vested interest in supporting British business. The company’s Gripen fighter jet, which derives 37% of its value from the UK supply chain, has the potential to generate £2-3 billion in economic benefit and a further 5000-6000 British jobs over the next decade. As the company continues its expansion, the UK is increasingly seen as a home market – so much so that a state-of-the-art UK-based Innovation Centre is now in the works.

“Saab is actively seeking to expand its manufacturing and export base here in Britain,” concluded Saab UK’s Head, Andrew Walton. “We see the UK as a strategically critical customer because of the global renown of British Armed Forces and we want them using our products.”

“The UK is absolutely a Tier 1 customer,” Walton continued. “Saab has a long-established history with the Royal Air Force dating back 40 years, during which we have developed systems for the Harrier, Tornado and Typhoon. The performance and technology requirements across the Services, together with the high standards we place on ourselves, means we’re very much looking to leverage our experience to become an even more trusted supplier of advanced technology to the UK.”

To find out more about Saab’s sensor technology, visit: www.saab.com

Previous Post
Leidos to develop counter technologies for submarine defence
Next Post
The next giant leap: The UK launches its space ambitions