More defence business on the radar for UK technology&nbspfirm

Tensions between South Korea and its northern neighbour are rising again and Seoul and its US ally are looking to their defences against possible aggression.

These include radar display and tracking subsystems supplied by UK company Cambridge Pixel for deployment at air bases across the Republic of Korea.

The company, which is based near Royston on the Cambridgeshire/Hertfordshire border, is a specialist provider of niche technology for radar processing and radar display.

This was to meet a need on the part of the Republic of Korea Air Force (ROKAF) to upgrade its systems to include primary radar display and tracking, as well as fusion of primary tracks with IFF (identification friend or foe) data. Cambridge Pixel was able to offer functional modules that allowed HTC to build the required capabilities into their own solution to the Air Force.

HTC chose Cambridge Pixel because it allowed them to add key radar processing and display functionality into their own system and to write their own display application code to meet the sensitive and unique requirements of their customer, thereby retaining in-country capability.

According to HTC Senior Engineer Jaehun Kim: “Cambridge Pixel’s highly flexible radar tracker was able to accommodate our different radar sensors and target motions to deliver a cost-effective solution for this air base application. In addition, the company’s engineers were extremely responsive throughout all stages of this project, and when changes to the radar and IFF interfaces required additional development, this was undertaken in a timely manner. Cambridge Pixel’s software was straightforward to integrate within our own display application code and the upgrades were successfully delivered to the Air Force on time.”

Cambridge Pixel has ten employees and an annual turnover of about £3 million, of which about 70% comes from export to some 42 countries around the world. 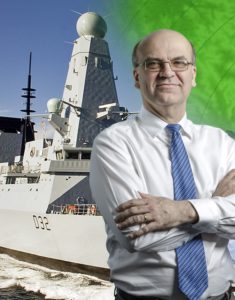 Chief Executive David Johnson explains: “We provide products and expertise connecting to radars and making sense of that data. That means creating pictures, so if you are navigating a ship you want to be able to see a radar picture of what’s around you. We create radar pictures that people can use.”

He adds: “Then we go a step further and we analyse that information and we say: ’We think there is a target here that you should be interested in; there’s a small boat in the sea – you might not be able to see it, but my processing has revealed it.’ It’s the extraction of information from the data which is often the most important component of what we do.”

He estimates that about 95% of what his company does is writing software with the only hardware elements relating to the interface with the radar, the analogue to digital conversion and the signal conditioning.

This navigation radar system – along with Kelvin Hughes’s solid-state SharpEye radar transceivers – will be fitted to more than 60 Royal Navy platforms over the next five years. The new equipment is part of the Navigation Radar Programme (NRP), a £44 million Royal Navy upgrade awarded to Lockheed Martin by the Ministry of Defence in January 2016.

Johnson says: “Our technology software modules fit well with Lockheed Martin’s vision of developing a navigation radar system that meets the Royal Navy’s needs now but that also has a clear route to adding extra functionality in the future.”

The radar tracking module processes the radar data to automatically acquire and track targets, and the radar fusion software combines tracks from multiple radars on the ships with AIS (automatic identification system) transponder data and other sensor data into a single, integrated data source.

To assist Lockheed Martin during the development and test phase of the new navigation radar system, Cambridge Pixel is also supplying radar simulation and recording capabilities from its established SPx product family. The RDR Radar Data Recorder captures raw video from the sensor as ASTERIX CAT-240, along with AIS data and navigation data.

While defence remains Cambridge Pixel’s core market and accounts for about 70% of its business, it is also seeing an increase in demand in the security sector.

“Radars are becoming much more prevalent in security applications, not just military security but asset protection,” says Johnson. “In the same way that CCTV cameras are ubiquitous now radars are coming along to complement the cameras.”

Again, Cambridge Pixel creates displays that show what the radar can detect along with what the camera can see and combines the two.

Johnson adds: “People are interested in detecting small targets which are not doing the expected thing or are in the wrong location. One of our projects recently was providing security for a holiday island where there’s obviously an interest in avoiding people with small boats coming in and causing a nuisance and destroying the tourism industry.

“An investment in technology that detects these targets when they’re five miles out allows somebody to take action before the worst case happens.’’

The growing threat of international terrorism means this market is likely to grow, as does the migration issue and – post-Brexit – the need to secure the UK’s borders.

“The technology that we have is all about providing information that allows people to act on it,” says Johnson. “The further out you can see something, the longer that translates into time to do something about it.”

Cambridge Pixel, which was founded in 2007, was awarded a Queen’s Award for Enterprise in International Trade for ‘outstanding overseas sales growth’ after it achieved export sales growth of more than 40% between 2012 and 2014.

While the fact that radar was a British invention no longer cuts any ice in the hardnosed world of defence and security exporting, Johnson believes there are tangible advantages to being a UK company.

He concludes: “The Americans make life difficult for themselves with their export restrictions. We have got many companies who prefer to buy from a UK company as opposed to a US company because of this. Worldwide, English is a second language so communication is generally easier. We try to exploit the benefits of being a British business. The history of where radar came from is probably lost by now.