Major challenges as well as opportunities face businesses and other organisations in the UK defence procurement supply chain.

The conference and exhibition, which was held at the Motorpoint Arena in Cardiff on 28 March, was attended by more than 1500 key decision makers from the defence procurement world, as well as some 120 exhibiting organisations from both the public and private sector, ranging from major primes to SMEs.

The event featured a Live Keynote Arena which hosted some of the most influential and authoritative speakers from the defence procurement community. These individuals gave attendees invaluable insights into some of the most important policy issues and challenges facing the UK defence supply chain today.

The welcome address to the Live Keynote Arena was given by the chairman Les Mosco, Chief Executive of Commercial Strategies Ltd and former Commercial Director at the Ministry of Defence. 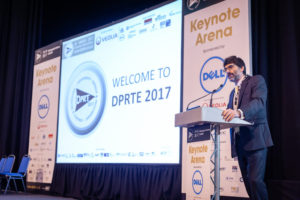 He outlined some of the challenges of defence procurement, which he had experienced first-hand while working at the MOD.

I do think that defence is among the hardest procurement and supply chain activities. It is sometimes – literally – a matter of life and death. It is about defence predominantly and buying the right thing to protect our Service personnel. Buy the wrong thing and bad things can happen.”

He added that efficient procurement, positive supply chain engagement, proper use of technology and innovation, and exporting were vital contributors to UK safety and security.

He also argued that Brexit will not mean an immediate end to the EU procurement regulations in the UK, that there would be no sudden abandonment of the rules when the UK left the EU.

Mosco added that he believed the rules to be a bad codification in many areas, and eventually the UK could make improvements.

But a later speaker in the Keynote Arena outlined more far-reaching consequences of the UK’s decision to depart the EU. 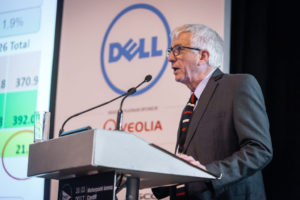 He said that it would never be known whether the economy would perform better outside the EU than inside and that he would make no such forecasts. He simply calculated what the defence budget might be – assuming it equalled 2% of GDP – with different rates of economic growth. By 2026, the difference between 1% growth and 2% growth in the UK economy would be £21 billion to defence with the difference to the annual defence budget being £4 billion by that date. “What this does is underline the interest of the MOD in the success of the wider prosperity agenda,” he said.

Prof Taylor said that the second variable that would affect defence procurement was the strength of the pound. The assumption behind the MOD’s spending plans was that the sterling/dollar exchange rate would be around $1.54 and that currently it was around $1.24. If sterling recovered against the dollar over the next two years hedging would mean there would be little impact on defence spending. But a sustained devaluation of sterling would make the UK’s defence imports much more expensive than anticipated.

In this situation, if we have sustained devaluation, either the MOD will stick to its current plans for buying equipment from overseas, which will leave less in the £178 billion for UK suppliers, or it will reduce its commitments from overseas to make more of the pound available to British suppliers, which will look slightly less expensive,” he said.

He added that the MOD had said it would spend $2.6 billion over the next decade; if the pound remained at around the $1.25 mark, this would mean an extra cost to the MOD of £430 million a year.

However, he said that there were signs the Government was moving towards playing a more active role in the economy and was more interested in addressing regional inequalities, which could have a positive effect on domestic suppliers.

“The emerging defence industrial agenda to sit alongside national industrial policy could well mean more active support for defence businesses, especially ones in the less prosperous areas of North and South West England and parts of Scotland,” he contended.

He also raised the issue of whether the pressure to make efficiency savings and other Brexit-related pressures could incline the MOD towards more outsourcing.

“If companies can provide a service to a more satisfactory level and more cheaply than can the MOD, that service is likely to be moved outside government,” he said.

He further floated the possibility that bad feeling from the Brexit negotiations could spill over into UK and European defence co-operation.

Another keynote speaker was Nick Elliott, Director General Commercial at Defence Equipment and Support (DE&S), who was described by Les Mosco, in introducing him, as being “central to the MOD’s commercial dealings for the bulk of its £20 billion spend”. 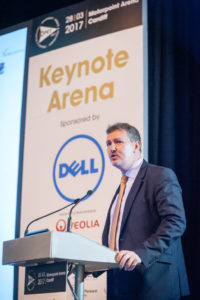 He began by pointing to the significant political changes of 2016 and the opportunities that these present, and how these external changes are being faced by DE&S.

He argued that to effectively fulfil DE&S’s function of equipping and supporting the UK’s Armed Forces – currently engaged in 28 operations in 25 different countries – defence spending and procurement must place as much emphasis on the whole-life costs of equipment as the initial procurement.

We need to focus on the support spend as much as we do on the buying at the front end,” he said. “If you buy a puppy, it’s not the £250 you spend on buying that puppy that’s important, it’s the whole-life cost of vets’ bills, food, care and kennels – it’s a much larger investment, and the sooner we start to undertake and manage our whole-life costs the better.”

He added that although the Government had honoured its pledge to spend 2% of GDP on defence and was investing £178 billion on equipment and support over ten years, resources were coming under increasing pressure and therefore DE&S was focused on becoming more commercially minded, having been made a Bespoke Trading Entity (BTE) in 2014.

“In some ways, the specific freedoms of being a BTE are less important than the mindset that instils,’’ he said. “That revolves around doing the business basics and doing them well, providing clear direction, setting targets, measuring achievements and performing to plan. We are completely focused on making those business basics our DNA.”

For DE&S and in turn for our industry partners that means the relentless pursuit of value. We need to embrace constructive disruption in all areas if we are going to generate a step change in customer value.”

He was followed by Fiona Phillips, Head of Commercial Army at the MOD, who spoke about the frontline commercial approach to procurement and what it means for industry engagement. 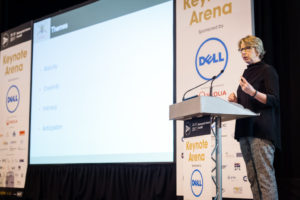 “That is about being combat ready and adaptable, being able to contribute and being prepared for current and future contingencies wherever they occur,” she said.

She added that when the refreshed defence industry strategy is launched in the coming months some of the underlying principles would be about promoting prosperity.

She outlined, too, some of the challenges facing the Army.

She said the right equipment and support were ‘pivotal’.

“One of the things that does need to change is that we must engage early with industry. I heard this morning that ‘the military are dissuaded from engaging with industry’. We can’t operate like that anymore.”

She argued that those in the frontline commands should consider at an early stage, before formal procurement, some of the elements that would help longer-term engagement with industry.

Early engagement is a must-do,’’ she emphasised.

Phillips also underlined the importance of innovation and creativity.

“We’ve been talking about innovation for decades. We ask for it in all our procurements. Sometimes when we get it, we don’t know what to do with it. So, we do need to change our approaches to how we can be creative. We need to be creative about setting our requirements, about our procurement strategies; we want creativity from industry, we want creative commercial models, we want creative contract management that sees us unlocking benefits over the life of those contracts and not just sitting on them once they have been delivered.’’

Joshua Reddaway, Director, Cross Government at the National Audit Office (NAO), talked about changes in government and how commercial was no longer seen ‘as just about buying things’ but was about structuring and managing commercial relationships; and how changes in DE&S were mirrored by changes elsewhere in government. 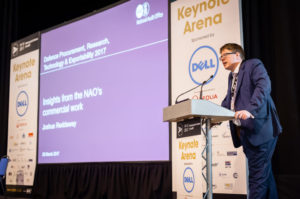 He described how the first report to Parliament on procurement was in 1880 and dealt with the rising price of military ribbon, and how the NAO had been preparing reports for many years but now wanted to add more commercial value.

“We are looking forward to a time, not too many years hence, when, as government ups its game on the commercial side, we need to do that as well,’’ he said. “So, instead of coming to each contract and just applying our general skills as accountants we would start to take a more sustained and systematic approach to the way that we look at contracts.”

He explained that the NAO would look at the whole life of a programme and not just buying, and that that process started with commercial strategy. The NAO has identified 20 main messages.

The NAO had also found that government was lacking in capability in many key areas and lacked sufficient skilled and trained people in areas such as infrastructure projects, digital developments and Brexit.

“We believe it’s doing much more than it’s able to do and it needs to be able to prioritise – and defence isn’t immune from that,’’ he said.

Reddaway finished by emphasising the importance of transparency and partnership and by pointing out that it was not in a supplier’s long-term interests to exploit weaknesses in government’s procurement procedures.

“Government’s weaknesses and problems and challenges really are your challenges and this is what you need to work with if you are going to have a sustainable business in this sector,” he concluded.

The final Keynote Arena speaker was Rob Solly, Acting Head at the Defence and Security Accelerator. He explained that £800 million of investment in new technologies from the Defence Innovation Fund would mainly flow through the Accelerator, which would be working with industry to find novel suppliers and novel ways of tackling defence challenges. 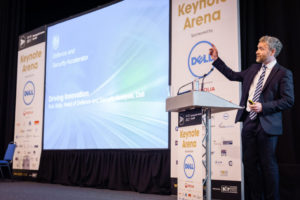 He said there was a move towards a culture change in defence and security “to get us to take more risk, to get us to embrace new ways of working and new suppliers”.

He added: “We provide innovation as a service to customers and our customers are the frontline commands and the security services. What we are aiming to do is provide them with access to a really wide network of suppliers with innovative ideas but also to help them accelerate the development of the ideas that we already have.”

He said a secondary role was to also generate economic value for the nation.

We want you to see us as a simple and straightforward way of doing business with defence and security,”

he said, adding that Accelerator advisers would guide suppliers through the process of defence procurement and help bring customers and suppliers together.

In summing up the Keynote Arena presentations at DPRTE 2017 Les Mosco said that some of the key themes had reflected a genuine appetite on the part of the Ministry of Defence for more transparency and greater dialogue with suppliers and an openness to innovative ideas.

The challenges facing government and industry in the defence market and across the procurement supply chain are great – but so are the potential opportunities and rewards.