Declassified Patient of the Month: Hitting the right&nbsptarget

Declassified patents provide an intriguing insight into Britain’s Cold War history and this example of technology first filed back in 1959 is no exception.

Rooted in early analogue electronics, it could seem quite straightforward by modern day standards, but at the time it was an example of cutting edge technology and due to its relevance in the field of battle, it was kept under wraps for almost 50 years, until 2009.

Back in the 1950s, infrared missile fuses had to be able to discriminate between a target and other sources of infrared light, in particular the sun. This was made more difficult by the different absorption properties of light, depending on its path through the atmosphere.

The invention uses a pair of infrared radiation detectors, as shown in Figure 3. The first, detector (9), is highly sensitive to the emission spectrum of the effluxes of a jet motor; detecting infrared light of around 4 microns. The second detector (10) is arranged to be highly sensitive to emission bands, which are emitted continuously by the sun, detecting infrared light of 1.8 microns and below. 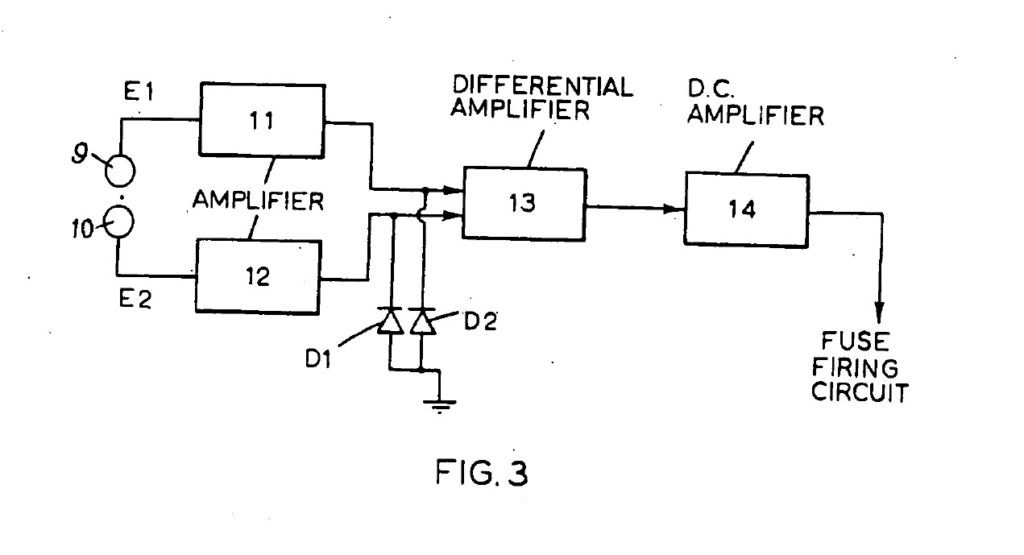 The output signals of the two detectors are separately applied to respective amplifiers (11) and (12) and negative clipping diodes (D1) and (D2) to a differential amplifier (13). The output of this amplifier is positive if the magnitude of the output signal from the first detector is greater than that of the second, but negative if they are the other way around. A DC amplifier (14) receives the output from the differential amplifier and generates a firing signal, which is directed to a fuse firing circuit only when the output is positive. Thus, a firing signal is only produced if the detectors receive energy from a target and not from the sun.

Proof that analogue thinking can be ingenious. In this case, it made correct detonation of a missile much more reliable.

The post Declassified Patient of the Month: Hitting the right target appeared first on Defence Online.