Breakthrough in radar technology for military&nbspenvironments

Advances in the technology used in unmanned aerial vehicles have been adopted for military purposes and are, in turn, now bringing benefits to the commercial world, as defence features writer Mark Lane learns talking to Peter Doig of Plextek.

Drones, or unmanned aerial vehicles (UAVs), are becoming increasingly used in the military and civilian worlds with enormous potential for the fruitful transfer of technology.

Plextek, an Essex-based design and innovation technology consultancy, has been working with the Defence Science and Technology Laboratory (Dstl) on a programme called Autonomous Systems Underpinning Research (ASUR) since 2013.

Plextek has been looking at micro-radar and the 60GHz radio frequency and how low size and weight technology can bring enhanced capability.

One of the challenges addressed is that of operating a small UAV in a non-line-of-sight environment such as an urban canyon or into a building. 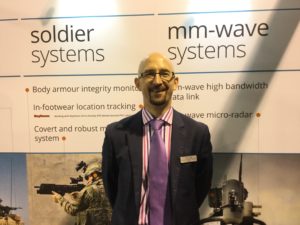 Plextek’s Head of Defence Peter Doig explains that 60GHz is particularly suited to use in an indoor environment as it is strongly reflected by most surfaces, allowing it to penetrate deeply into buildings. It also has advantages over other systems in navigation, detecting objects, and sense and avoidance.

He says: “Conventional sensors such as camera systems only provide range or depth perception after significant, complex processing of the sensor data and that’s not easily compatible with the processing power available on a small UAV.”

Laser-based range detection systems, such as LIDAR, have high resolution and high precision but do not function so well in conditions of rain, fog or dust and don’t have the same ability as radar to detect moving objects.

Also, with micro-radar, Plextek has been able to take advantage of some commercially available technology.

“There’s a lot of commercial exploitation within the 60GHz wave band at the moment – the industrial, scientific and medical or ISM band – so we had access to very cheap, single-chip transceiver solutions on silicon germanium technology,” explains Doig.

“That’s the type of technology that’s being developed for the 5G commercial requirement.”

He adds: “We needed to investigate whether they had utility as a radar processing platform.”

Once this was demonstrated, that gave Plextek a low-cost, relatively low power consumption and lightweight technology on which to base its research.

“We needed to design and build the radar sensor from off-the-shelf modules and integrate them to determine whether you could build it small enough for integration on a UAV. We also had to investigate whether you could successfully detect objects of interest in sufficient time to enable the collision avoidance side of the problem,” he says.

Plextek built two variants of a concept demonstrator, a mechanical scanning variant which can scan in two dimensions and a one-dimensional scan system, both of which have successfully undergone a range of trials and tests.

This has demonstrated that the radar can detect objects of interest to a UAV: for example, a 10mm diameter wire rope out to 35m, a chain link fence out to 120m, a quadcopter out to 75m and a person at a range of more than 150m. This would allow the flight control on the UAV to perform collision avoidance.

The successful trials mean the technology can also be used in a number of commercial and civilian applications.

“Off the back of that research we had an international client which had a requirement for a short-range foreign object detection (FOD) system for airport runways, an important safety control,” notes Doig. “Small debris, loose objects and wildlife have the potential to cause damage to airport equipment which causes delays to runway operation. Our client’s vision was for a low size, weight and power (SWaP) solution, which could be easily deployed without compromising high-accuracy performance.”

Plextek took the radar developed for the Dstl project to provide a solution capable of detecting objects and movements from a fixed site out to 400m and also implemented a mobile system where the radar is mounted onto the roof of a vehicle to scan the runway while moving.

Doig says: “Essentially the advanced design has enabled our client to produce a highly accurate FOD radar for reduced deployment cost and time to market off the back of the military-funded research.”

The Ministry of Defence also has a need for smart sensing in UAVs for autonomous last-mile resupply to deliver mission-critical supplies; in response, Plextek has put forward a proposal to demonstrate the radar’s capability.

The company hopes that this system will also allow organisations such as Amazon to make deliveries using UAVs at night and in inclement weather conditions.